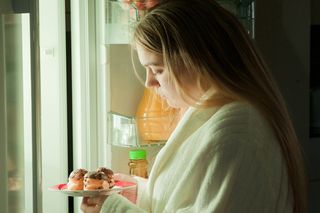 WASHINGTON — Good news for those who struggle with diets: Eating less may be easier than you think, psychologists say. By making simple changes to your environment, you might be able to eat less without really thinking about it.

"Our homes are filled with hidden eating traps," said Brian Wansink, director of the Food and Brand Lab at Cornell University.

"Most of us have too much chaos going on in our lives to consciously focus on every bite we eat, and then ask ourselves if we’re full. The secret is to change your environment so it works for you rather than against you," Wansink said in a presentation today (Aug. 5) at the American Psychological Association's annual meeting here.

Although we might not be aware of it, something as simple as the size and shape of food containers can fool our brains into eating more.

Wansink and his colleagues designed bottomless bowls, which continually refill with soup from a source under the table. Wansink found people eat 73 percent more soup from these bowls than they did from regular bowls. But they didn't realize they had eaten more, Wansink said.

To be sure, the environment isn't the only influence on how much we eat. Some people might have trouble sticking to diets because of differences in their brain chemistry, other researchers say. Obese people's brains release less dopamine in response to food than others, said Brad Appelhans, clinical psychologist and obesity researcher at Rush University in Chicago. Dopamine is a chemical responsible for signaling rewards in the brain.

But to make your eating environment healthier, Wansink recommends the following strategies:

Participants in one of Wansink 's studies lost up to 2 pounds a month once they made these modifications.

"These simple strategies are far more likely to succeed than willpower alone. It’s easier to change your environment than to change your mind," Wansink said.

Pass it on: Simple changes to your environment may help you eat less without really thinking about it.