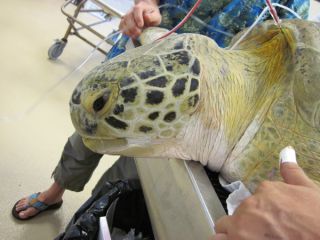 The patient washed ashore badly beaten, suffering from pneumonia and a collapsed lung. He was pulled to safety on a boogie board by beachgoers, but his prognosis looked grim.

The 25-year-old patient was a green sea turtle, weighing in at 177 pounds (about 80 kilograms). After a long and hard-fought battle for his life, and to regain his physical mobility, the saga of sea turtle Andre came full circle yesterday, as he pushed off from the shores of Juno Beach, Fla. [Stunning Sands Gallery: A Rainbow of Beaches]

"He has overcome obstacles, predators, food scarcities, cold winters — any number of things that may have ended his life — and he has survived," Nancy Mettee, a veterinarian at Loggerhead Marinelife Center who cared for Andre, said in a statement to MSNBC. "He's really a miracle turtle."

Andre was discovered on June 15, 2010; the sea turtle that would eventually be known as Andre washed up, stranded on Juno Beach after being badly injured by what researchers assume was a boat propeller. He was transferred to the Loggerhead Marinelife Center, where he met Mettee and started the uphill battle of recovery.

During his time at the center, local community members and people around the world watched his recovery through the "Andre Cam," which monitored his activity 24 hours a day.

The propeller that reportedly struck Andre had ripped through his shell and skin, heavily damaging his back. He also had a collapsed lung and was suffering from pneumonia. After he was rescued, Mettee and her staff removed over 3 lbs (about 1.5 kilograms) of sand and a live crab from his wounds.

The vets used several human technologies to save the turtle, which had long, deep gashes in its shell. The gashes were so bad his spinal column was exposed. To cover his spine, the vets used a special matrix (the framework that holds cells in the shape of tissues) to give his cells somewhere to grow.

During his healing process the team also used vacuum dressings to speed recovery. The vacuum fights infection and speeds healing by sucking out bacteria, helping white blood cells move into the wound where they help fight infection, and drawing wound edges together to spur healing.

He was released from Juno Beach yesterday (Aug. 3) at 10:30 a.m. ET, while locals, school groups and other well-wishers saw him off.

The conclusion is yet another beginning for the beloved sea turtle, which will re-enter the wild in search of a mate during the upcoming breeding season. Green sea turtles are an endangered species, so being able to reintroduce a breeding male into the population is a score for their future populations.