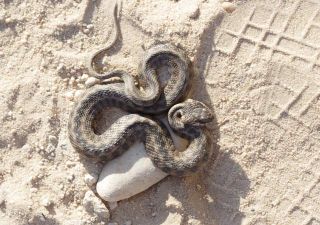 Harmless snakes can apparently squish their heads to look like venomous vipers and avoid getting eaten, scientists find.

Vipers such as rattlesnakes are notorious for their venom. They also have distinctive triangular head shapes, due to how their venom glands fill up the backs of their heads.

Scientists noticed that many grass snakes (Natrix natrix), viperine snakes (Natrix maura) and a number of other nonvenomous serpents could flatten their normally rather narrow heads into triangular shapes. Researchers suspected they might do so in order to mimic their more dangerous brethren, which many predators would reasonably want to avoid — indeed, viperine snakes also have a zigzag pattern on their backs, something commonly seen in European vipers.

Protective mimicry is common in the animal kingdom. A number of spiders resemble ants, mimicking them not only physically but in the way they walk, and the extraordinary mimic octopus can shift its color and shape to impersonate anything from sea snakes to stingrays. [Dangers in the Deep: 10 Scariest Sea Creatures]

To investigate whether these harmless snakes were contorting their heads to protect themselves, evolutionary biologist and herpetologist Janne Valkonen at the University of Jyvaskyla in Finland and his colleagues experimented with fake snakes made of modeling clay. Some had triangular heads while others had narrower heads; some had zigzag patterns on their backs while others were plain.

The researchers took nearly 600 replica serpents into Coto Doñana Natural Park in southern Spain. "The place is perfect for this kind of experiment because there is a large amount and variety of raptors [birds of prey] nesting in the area," Valkonen explained.

The scientists left the clay snakes out for up to three days and found that replicas with triangular heads got attacked a lot less often than ones without them. Only about 6 percent of the fake serpents with either viper heads or zigzag patterns or both were assaulted, while nearly 15 percent of snakes with neither viper heads nor zigzag patterns were clawed at by raptors. [See snake flattening its head]

The fact that nonvenomous snakes can benefit from mimicking their more lethal relatives could prove important when it comes to conserving both kinds of serpents.

"Harmless mimics cannot gain the benefit of avoidance of predators if the venomous snakes that they are mimicking are not common enough," Valkonen told LiveScience. "If the real thing becomes too rare, predators 'forget' the danger."

These fake snakes did not fool mammals — the scent of modeling clay seemed to give them away, the researchers said. In fact, the researchers had to spray the replicas with insect repellent to deter foxes, as past field work revealed they apparently enjoyed biting the fake snakes. Future research with scent-disguised replicas could test whether this snake head shape mimicry tricks mammals.

The scientists detailed their findings online July 27 in the journal PLoS ONE.