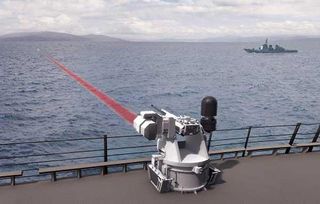 Like peanut butter and chocolate, the U.S. Navy thinks machine guns and lasers are two great tastes that taste great together. They hope the combination of old school lead with new school "pew" will better protect their ships from attack by smaller boats.

BAE Systems, a British defense firm, already makes the giant machine guns that protect warships from approaching watercraft. But yesterday, Boeing announced that they will team up with BAE Systems to develop a solid-state laser that would work in tandem with the already potent weapon.

BAE won the contract to develop the laser, which the Navy envisions as a countermeasure against small drones, tiny boats and anything else that gets too close a Navy surface vessel. Now, Boeing has joined the team to develop the prototype weapon.

It's anybody's guess what kind of threat a machine guns or lasers can't defeat on their own (Mothra? Decepticons? Kraken?). But now that 19th century ballistic technology has teamed up with 21st Century ray gun tech, whatever that enemy may be will think twice about messing with a U.S. Navy warship.