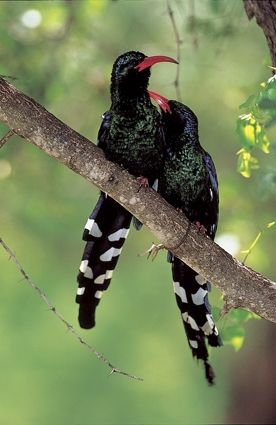 One woodhoopoe grooms a flockmate. A new study finds that the bird doing the grooming gets a stress-relief boost from the experience.
(Image: © Chris van Rooyen)

Is your boyfriend or girlfriend begging for a massage? Go ahead, give it to them. A new study of the social life of birds finds that while it's better to receive than to give, an individual providing a massage can expect a relaxation boost as well.

Birds don't give massages, of course; instead, they groom one another. But just like in humans, this social behavior promotes bonding and de-stresses the animals, according to a new study published today (July 26) in the journal Biology Letters.

"Giving of these kinds of social behaviors can be rewarding in their own right," said study researcher Andrew Radford, a biologist at the University of Bristol. "You might be gaining something yourself in being nice in that way, by reducing stress."

Birds of a feather groom together

Studies of joint grooming behavior (called "allogrooming") have mostly focused on apes and monkeys, Radford told LiveScience. But like primates, birds live in complex social groups and spend lots of time preening one another. Radford wanted to find out what the feathered creatures were getting out of the experience.

He observed green woodhoopoes, small, metallic-colored birds that live in thickly forested valleys in the Eastern Cape province of South Africa. The birds are "actually a bit of a nightmare to follow," Radford said, since they move around a lot in their leafy habitat. But fortunately, woodhoopoes sit still when they're grooming, making it easier to watch what goes on.

To gauge how birds felt after a good grooming session, Radford watched their post-allogrooming behavior. A stressed bird will groom itself further, while a relatively relaxed one will lay off the preening. Radford compared the amount of time spent preening both post-allogrooming sessions and when the birds hadn't been involved in pair grooming recently. [10 Amazing Things You Didn't Know About Animals]

Surprisingly, both the groomer and the groomee spent less time preening themselves post-allogrooming — though unsurprisingly, the stress relief effect was greater for the birds that had received the "massage" instead of giving it.

The findings are important for understanding how social animals evolved, Radford said. To grasp social behavior, he said, you have to find out what motivates the exchange from both the giving and receiving perspective, he said.

For example, birds that were lower in the pecking order also got a greater stress-relief boost from being involved in grooming, whether giving or receiving, than dominant flock members, Radford said. This may be because subordinate birds are bullied more often than dominant birds, so a soothing grooming session is comparatively more relaxing.

"Life might be more stressful in general for a subordinate," Radford said. "Perhaps you feel more secure [when] you're currently involved in a nice social bonding experience."

Editor's note: This article has been revised to reflect the correct journal title. It is Biology Letters, not Proceedings of the Royal Society: Biology Letters.