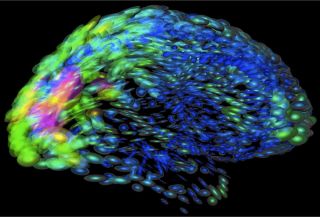 Unlike chimpanzee brains, the human brain shrinks with age. Age-related loss of brain volume may be the price we pay for outliving our reproductive years.
(Image: © National Institute of General Medical Sciences, Arthur Toga, University of California, Los Angeles)

Brains that shrink with old age may be the cost of a life span stretching into the 80s, according to a new study that finds while human brains get smaller with age, the brains of our closest primate relatives, chimpanzees, don't lose volume at all.

The findings suggest that the human life span (average length of life of an organism) isn't just an extended version of the life span of other mammals, said study researcher Chet Sherwood, an anthropologist at George Washington University in Washington, D.C. Instead, humans seem to experience old age in a unique way.

"The greatest point of deterioration that we found is in that part of the human life span which is beyond the life span of wild chimpanzees," Sherwood told LiveScience. "We think that the effect we see is the result of increased longevity."

The findings, published today (July 25) in the journal Proceedings of the National Academy of Sciences, could explain why humans are uniquely vulnerable to Alzheimer's and other age-related brain disease, Sherwood said. [Read: 7 Ways the Mind and Body Change with Age]

Chimps and humans are separated by between 6 million and 8 million years of evolution, dating back to the last common ancestor we shared with our ape cousins. The two species have clearly diverged quite a bit during that time period, with one of the less-visible differences occurring in the brain. In old age, the human brain shrinks in overall size by 10 to 15 percent. In chimps of equivalently old age, the new study finds, there is no shrinkage at all.

Sherwood and his colleagues compared magnetic resonance imaging (MRI) scans of the brains of 87 humans ages 22 to 88 with MRI scans of 69 chimpanzees from the Yerkes National Primate Research Center in Atlanta. The chimps ranged from 10 to 45 years old. The researchers also examined the brains of deceased chimps as old as 51.

In the wild, Sherwood said, chimps are usually dead by 45. Likewise, studies of foraging communities suggest that the mid-80s is the typical life span for pre-industrial humans. Thus, the study captured more than the full range of life spans and brain aging that you would expect to see in the evolutionary past of chimps and humans.

Focusing on the frontal lobe and hippocampus, the most shrink-prone regions of the human brain, the researchers found the expected loss of brain size with age in the human volunteers. But the chimps' brains showed no size change at all.

That's not to say that chimps' brains don't change with age — other studies show cellular changes and subtle structural changes in animals as they get older — but the direct comparison makes it clear that "whatever is going on is certainly more extreme in humans," Sherwood said.

Sherwood suspects that as natural selection began to favor the large human brain, humans had to deal with the associated costs, including relatively helpless infants and an extended childhood as that brain develops. In most mammals, females die once they can't reproduce anymore. But human women can expect to live 40 years past menopause. This longevity may have evolved so that grandparents could help their own children with childrearing, thus ensuring that their offspring's offspring would survive to spread their genes.

The cost of having grandma and grandpa around as nannies is that the brain's repair mechanisms may not have evolved to pick up the slack.

"If you're going to take on another 40 years of life span and these neurons have to function, that ultimately seems like it's going to be hard to keep up with," Sherwood said.

In fact, humans outlive their reproductive usefulness for so long that it's amazing their brains don't degrade faster, said Todd Preuss, a neuroscientist at Yerkes National Primate Research Center who was not involved in the current study. Preuss and his colleagues are studying the subtler differences between human and chimp brains, trying to understand how molecular and cellular variations separate us from our nearest living relatives.

"There is the opportunity here for much more microscopic and biochemical work," Preuss told LiveScience. "The particular vulnerability of the human brain to Alzheimer's disease suggests that there's something unusual about our brain chemistry."