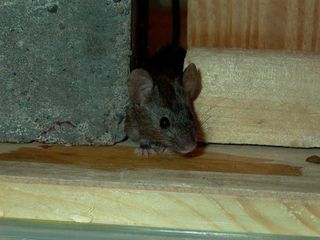 The European house mouse inherited a chuck of genes from the Algerian mouse in one of the first examples of genes spreading between species of mammals.
(Image: © Stefan Endepols/Bayer CropScience AG)

Poison-resistant mice have been giving homeowners throughout Germany and Spain increased trouble in recent years. New research indicates that some of these mutant mice developed their immunity in a surprising way: by stealing it from another species.

Poison resistance usually evolves as a result of changes to one letter, or chemical base, of the genetic code. In contrast, these freak mice, a mutant form of the European house mouse, inherited a whole chunk of genes from Algerian mice, a species they shouldn’t have been able to breed with. And the process is still continuing. [Real or Fake? 8 Bizarre Hybrid Animals]

"For animals, we did not know that there seems to be another pathway how you can evolve, by adopting a gene from another species and incorporating it into your own DNA," said study researcher Michael Kohn of Rice University. "In microbes it's quite well understood"— in plants, too — "but I don't think anyone could have thought this type of thing could happen in animals."

By sequencing the genes of the two species of mice, and the resistant strains of the European house mouse, the researchers discovered that two different types of mutation provide the same resistance.

Both types of genetic changes make the mice resistant to a type of poison that thins their blood by incapacitating a protein called vkorc1. This protein normally leads to the activation of vitamin K, enabling blood clotting, but it doesn't  when the poison is present. With the mutation, though, vkorc1 can escape the poison's incapacitating effects.

The researchers discovered that the vkorc1 gene from some of the European house mice was more similar to that of the Algerian mice than to the other resistant European strain or even to normal, non-resistant European mice.

The researchers think the Algerian mice developed this mutation because of their vitamin K-deficient diet, though they aren't sure how. It entered the European house mouse population when the two species mated several generations ago. The two species are evolutionarily separated by over 1.5 million years, so most hybrids of the two species don't survive or can't produce offspring.

"They are a little bit further apart than humans and chimps. That's not a trivial amount in terms of breeding," Kohn said. Even these European mice with only a chunk of Algerian genes seem not to breed as well as normal house mice in the lab.

In the wild, though, they breed well enough.

The two species have very different attitudes. The European mouse is aggressive and prefers to live inside houses, while the meeker Algerian mouse lives outside. They never came into contact until humans brought them together. Then they probably met somewhere in Spain or North Africa, where their ranges overlapped.

By looking at how much this chunk of genome has changed since the two species hybridized, the researchers determined that this stolen gene entered the European mouse's repertoire sometime after the poison was introduced  50 years ago.

Hybridization "has probably occurred occasionally since humans have brought them into contact … more often than we thought," Kohn said. "The gene has been adapted very recently, less than 20 years ago. The process is still in operation very recently and still ongoing in other places."

Kohn warns this could start happening more and more frequently, as related species come into close contact due to human interference or environmental change. For example, there is a hybridization of grizzly bears and polar bears in Alaska as their home habitats change with changing climate.