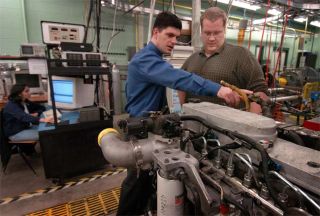 Engineers are tinkering with a new-age engine that could reduce fuel consumption and in turn help to squelch greenhouse gas emissions associated with automobiles. "We're talking about a major leap in engine technology that could be used in hybrid cars to make vehicles much more environmentally friendly and fuel stingy," said lead scientist Gregory Shaver, a mechanical engineer at Purdue University. Mechanics 101 Conventional engines run as a unit in which pistons turn a crankshaft and this causes valves to open and close, directing air and fuel into the engine’s cylinder and exhaust out. The new strategy dubbed “variable valve actuation” would decouple the motion of the piston from the motion of the intake and exhaust valves. That means engineers could regulate on a fine scale precisely how much air and fuel gets sucked into the engine and the output. “It’ll allow us to make both diesel and gasoline engines both cleaner and more efficient, because we’ll have more direct control over the valves,” Shaver said. For instance, engineers would be able to reroute exhaust back into the cylinder, a process that lowers the temperature inside the engine. The result would be drastic reductions in exhaust emissions, including that of nitrogen oxides or the precursors of smog. Shaver and his colleagues created a computerized method to track engine performance from one combustion cycle to the next. The results could open the door for environmentally friendly technologies that were not feasible with current combustion engines. With the model, they can make tiny changes to the timing of the opening of both valves and ultimately optimize how engines run on alternative fuels. “The major issue right now is that we have all these vehicles on the road today that are ‘flex fuel’ vehicles,” Shaver said. That just means the gas tanks won’t corrode and are chemically compatible with alternative fuels like ethanol. “Alternative fuels do not combust the same way as conventional fuels. So you can put ethanol in your engine, but your engine will not efficiently burn that,” Shaver told LiveScience. Green engines The decoupled system also brings scientists a step closer to perfecting the next generation of green engines, which would rely on homogeneous charge compression ignition (HCCI). The basis of HCCI engines is the fact that both the intake and exhaust valves are open at the same time so that exhaust can be rerouted back into the engine. One problem has been the lack of control over the valves, which could be disastrous, say, if too much fuel gets pushed out the exhaust. “We need tight control over how much fuel and air come through the intake versus how much hot exhaust gas comes through the exhaust valve,” Shaver said. The re-uptake of exhaust keeps the engine cooler. Even a slight drop in temperature leads to dramatic decreases in emissions of nitrogen oxides or the precursors of smog. The HCCI also uses compression that can occur at lower temperatures than the conventional spark ignition combustion.

Sensors inside the engines would monitor engine performance and alter the valves’ timing to optimize efficient combustion. "We will use feedback control, where you have sensors that provide data from the engine and an algorithm to precisely control the valves," Shaver said. Currently, the team is building a multicylinder engine based on this "fully-flexible variable valve actuation.”