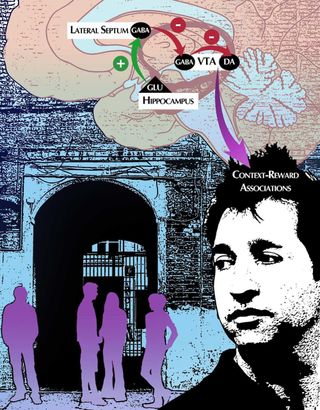 A new brain pathway has been identified that links a brain area involved in representing environments (hippocampus) to an area that processes reward (VTA). This is important, for example, because places where addicts previously sought or obtained drugs can cause them to crave drugs again and lead them to relapse. This circuit provides a target to manipulate to help break the addiction cycle. Click on the image to view the brain pathways that cause craving.
(Image: © Emma Vought)

What makes you crave a Big Mac when you see the golden arches? Or long for a beer when you see a cold one on TV? A single pathway in the brain is to blame, new research suggests, and putting the brakes on it could stop addicts from relapsing.

The pathway connects the hippocampus, the part of the brain that analyzes and interprets the environment around you (using the contextual information that comes in through your senses, such as  seeing a beer on TV) with the ventral tegmental area, or VTA, which processes reward-driven behaviors (such as grabbing a beer from the refrigerator).

Reward-driven behaviors release the brain chemical dopamine. Such behaviors include sex and eating, which are very important in daily life. But some drugs release these dopamine "rewards" at higher levels than natural reactions do, the heart of addiction.

"One of the issues we know of in drug addition is that a simple re-exposure to the drug-using environment ... will often result in relapse," said study researcher Alice Luo of the National Institutes of Health, in Baltimore. "Hopefully we can short-circuit the actual circuit itself, so the link between the context and reward could be blunted."

The researchers then put the rats in two types of cages, one that would administer cocaine to the animals and one that didn't.

The rats would receive an injection of the drug when they pressed a lever (doing "work" to get the drug) in the special cocaine cage. In their normal cage, though, a lever push wouldn't give the rats cocaine, and they eventually stopped trying.

Whenever the rat was placed back in the cocaine cage, the different environment reminded it to start pushing the lever again, just like seeing drug paraphernalia or a drug use environment can cause craving and relapse in an addict.

However, when the hippocampus-VTA pathway was blocked using inhibitory brain chemicals, the rat's lever-pushing habit relapses decreased severely — about 75 percent.

"They corrupted that pathway, and they could interfere with that drug-seeking response," said Friedbert Weiss, a researcher at the Scripps Research Institute in San Diego, who wasn't involved in the study. "It identifies the key points along that connection that are responsible for mediating that response and could in the future serve as targets for pharmacotherapy."

If drugs can be found that block the pathway, it's possible they could reduce environment-driven cravings, as a supplemental treatment to rehab and addiction counseling.

Other effects of blocking this integral pathway remain to be seen, however. The hippocampus plays an important part in learning and memory and is also important in understanding the changing environment around us. If normal reward-seeking behaviors, like eating and drinking, were also blocked by the therapy, the eventual result could be anhedonia, or the inability to experience pleasure.