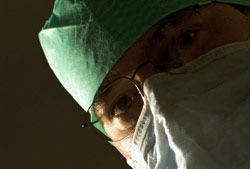 A man from southern California may undergo surgery to reattach or reconstruct his penis after it was reportedly cut off by his wife and thrown in the garbage disposal.

If most of the penis is salvageable, it could be reattached, said Dr. Andrew Kramer, a urologist and surgeon at the University of Maryland Medical Center.

"As bad as it may be, that’s always the best option," said Kramer, who is not involved in treating this patient.

For this operation to be successful, the penis would have to be put on ice and ideally attached within 24 hours, Kramer said. Because the incident allegedly happened Monday night, it may be too late for reattachment. But if the penis cannot be recovered, or it is in many pieces, as may be the case with the California man, a new penis will need to be constructed, Kramer said.

This would be done by taking a graft from a muscle, typically the forearm or thigh, and attaching it to the pelvic area. The muscle needs to be connected so it receives an adequate blood supply. Then the muscle would be covered with skin taken from another part of the body, Kramer said.

Such a penis would typically be sexually functional — the man could achieve an erection. A prosthetic device known as a penile implant could be placed inside the penis to help this, said Kramer, who specializes in erectile dysfunction treatments and penile implants.

However, aesthetically, the new penis will likely not look normal, he said.

"It's tricky — a lot of times it doesn’t look like the real thing," Kramer told MyHealthNewsDaily.

If the urethra, which is the tube that connects the bladder to the penis, has been cut off, it will need to be reconstructed somewhere else. Typically, surgeons reconstruct it lower down, under the scrotum, Kramer said. This would mean the man would have to urinate sitting down, he said.

The man would be able to have an orgasm because the nerves involved in orgasm are still intact. However he would not be able to ejaculate, Kramer said. If the man wanted to father children, he could have sperm extracted from his testicles and used in vitro fertilization.

Pass it on: A penis can be reconstructed using a graft from the thigh or forearm muscle and a skin graft