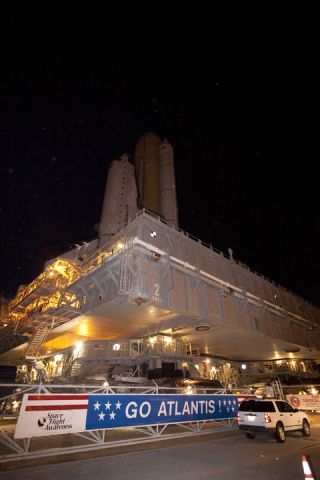 At NASA's Kennedy Space Center in Florida, space shuttle Atlantis moves through the perimeter fence at Launch Pad 39A. This flight marks the end of the shuttle program.
(Image: © NASA/Jack Pfaller)

The payload on the final space shuttle trip to the International Space Station is expected to include containers of plant seeds. The seeds aboard the shuttle Atlantis, which is scheduled to launch Friday (July 8), may help scientists understand how plants respond to the minuscule gravity of low Earth orbit. Research like this may lead to the development of bio-support systems for astronauts on long voyages and even help improve agriculture here on Earth.

The plants will grow for a week before the crew aboard the space station freezes them. The leader of the study, Imara Perera, and her team will examine the tiny plants once they are returned to Earth.

But there’s a hitch in the plan: The plants don’t have a ride home. With the shuttle program ending, Perera’s plants must secure space on a commercial flight, and none has begun running up to the space station yet.

“Of course we are anxious and we would like to get them back as soon as possible, but we do also want them to come back safely and intact,” Perera, a research assistant professor of plant biology at North Carolina State University, told LiveScience.

Thirty years after the first space shuttle launch, of Columbia, NASA is ending the space shuttle program with no immediate replacement for the low-orbiting shuttles, as it focuses on manned voyages farther afield, like the moon and Mars. At least in the short term, the gap left by the shuttles will be filled by a hodgepodge of commercial flights and other nations’ craft, such as the Russian Soyuz and Progess.

This transition has created some uncertainty among American scientists, who have depended on shuttle flights to ferry or conduct their experiments. While some anticipate upcoming delays or limitations on research, Tara Ruttley, NASA's associated program scientist for the International Space Station, offers reassuring words.

"Our office feels really comfortable from a research perspective," Ruttley said. "If you have an investigation you want to do on the space station, we will get you there."

From shuttle to station

The shuttle program allowed researchers to make significant progress unraveling how gravity, or the near-absence of it, affects living systems, according to Kenneth Souza, a longtime space biologist and senior scientist for Dynamac Corp. assigned to NASA's Ames Research Center.

The crew members on the shuttle did the work of scientists on the ground, taking a blood sample or a snip of a plant at a particular time to see what was happening. This type of experiment wasn't possible using the earlier, unmanned satellites, Souza said.

Shuttle missions lasted at most a couple of weeks, putting a hard time limit on any experiment. Meanwhile, experiments on the space station, part of which has been designated a U.S. national laboratory, can stretch out for months or longer, allowing scientists to look at longer-term effects of exposure to microgravity or low-dose radiation. [Inside and Out: The International Space Station]

"It is an order of magnitude better for research," said Chris Brown, director of North Carolina Space Grant and a professor of plant biology at North Carolina State University. "It is as if you were building a new house but it took you several too many years to build the house; while the trucks were driving in with supplies and dry wall, you were also living in the truck and cooking in the truck. You could say the truck was very useful, but now we have the house and you would rather do the work and live in the house."

Danny Riley, a professor of cell biology, neurobiology and anatomy at the Medical College of Wisconsin in Milwaukee, has studied muscle wasting in rats and astronauts during spaceflight and recovery on Earth. The space station provides an important platform for research into muscle atrophy because experiments can continue over long periods, mimicking the extended space travel necessary for, say, a journey to Mars.

Research so far has managed to reduce muscle atrophy, but not enough, according to Riley, who from his earthly lab is currently working on the effects of microgravity on posture.

"It is very frustrating because in this interim period of time we know what experiments should be done, but we can't get there to do them," ? or they can be done in only limited amounts, he said.

In order to return the American investment in the station to our economy, we need to use it and reap the benefits, Riley said. "I don't like being dependent on Russian or Chinese or European space agencies for access to the space station. I think then we are second-class citizens."

Space is not accessible

Atlantis' payload also is slated to include microbes for an experiment, to be conducted on board. Scientists wish to examine how microgravity affects the communities of micro-organisms that form on surfaces, called biofilms — "the stuff you have on your teeth in the morning, that kind of thing," said researcher Cynthia Collins, an assistant professor of chemical and biological engineering at Rensselaer Polytechnic Institute.

Getting the microbes into space and getting them back is, at least currently, crucial for experiments like this one, but the end of the shuttle program won't cut off this line of research.  "It's more something we just deal with at this point," Collins said. "We are really just excited to have this opportunity." Her lab in New York is set up to create a reasonable, but not perfect, match for microgravity.

"We are kind of waiting to see and keeping our fingers crossed that the commercial ventures will stay on track and are able to take large packages up in the next few years, and that we will have the opportunity to send our things up," she told LiveScience.

The transition is unlikely to affect American scientists' willingness or ability to do basic research in space over the next couple of years, according to Souza.

"American scientists have been working with limited access to space since the beginning of the space program," he said.

Certain research, however, has a particularly uncertain future without the shuttle. Researchers have studied the ionosphere — part of the upper atmosphere that contains charged particles — by observing the effects of exhaust from the shuttles' powerful Orbital Maneuvering System engines.

The shuttle pilot can precisely control the direction and duration of the firing of these engines, a feature important to this research, according to Philip Erickson, an atmospheric scientist at Massachusetts Institute of Technology's Haystack Observatory.

"The results [from the Shuttle Ionospheric Modification with Pulsed Localized Exhaust] so far have pointed to some possibilities for understanding the ionosphere better, but with time running out, we just don’t have the capability to make the follow-up measurements we need to fully understand the results," Erickson wrote in an email. It's conceivable these observations could be conducted with cooperation from a commercial company, but Erickson said he is not hopeful for this option.

For the long term, NASA is looking to commercial companies to develop vehicles capable of routinely carrying humans into space. And NASA's Orion space capsule, currently under development, is expected to be capable of carrying people to low-Earth orbit and beyond.

In the meantime NASA has awarded contracts to two companies to carry cargo to the space station. Orbital Sciences Corporation, of Dulles, Va., is developing the Taurus II rocket to carry its Cygnus spacecraft, and Space Exploration Technologies (SpaceX) from El Segundo, Calif., is developing the Falcon 9 rocket and Dragon space craft.

SpaceX is waiting for NASA clearance to fly a cargo-resupply mission to the station late this year, according to spokeswoman Kirstin Grantham. Orbital Sciences, meanwhile, is on track to launch its first demonstration flight, also carrying cargo to the space station early in 2012, according to Carl Walz, Orbital Sciences' deputy program manager for Cygnus.

NASA has also made arrangements for space on the automated European, Russian and Japanese cargo flights, and on the Russian Soyuz vehicle, which has life support.

The shuttles' large cargo space was devoted to carrying up large pieces of the space station during construction and to equip it. The commercial and international flights won't need to carry any of this massive cargo, opening up more space for experiments, at least on the way up, Ruttley said.

Getting back down is another matter. Of all of the vehicles traveling to the station in the near future, only the Cygnus and the Russian Soyuz are capable of returning. The others drop off their cargo and then burn up in the atmosphere. NASA has secured limited space on the Soyuz, for sensitive samples such as blood and saliva, Ruttley said.

There are also plans to improve the station's capacity to analyze samples on site rather than return them to Earth, according to Ruttley.

Cynthia Martin-Brennan, executive director of the American Society for Gravitational and Space Biology, see opportunity in this transition.

"I think for all of us it's all about having frequent access to space and being less expensive, because you've got competitors, and hopefully, multiple vehicles going to the station, we hope to see a little bit of pricing going on," Martin-Brennan said. "The shuttle was such a complicated vehicle. It takes a while to get it to go up, so we are hoping to see more access to space."