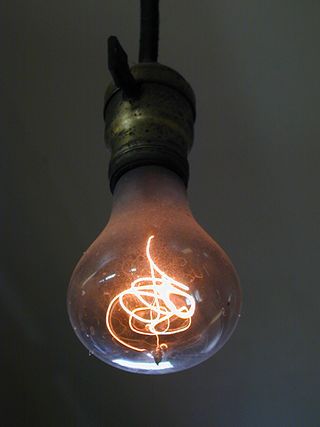 An incandescent light bulb recognized by Guinness World Records as being the longest burning is still glowing strong days after celebrations that marked its 110th anniversary.

The Centennial Light Bulb, at Fire Station No. 6 in Livermore, Calif., has been burning bright since it was first installed in 1901. (The exact date appears unknown, though the bulb's "birthday" is typically held in June, most recently June 18th.) Since then, the 60-watt bulb has been alight 24 hours a day, operating at about 4 watts, to provide night illumination of the fire engines.

Other than a few power outages, there has only been one break in its operation, when it was removed from one fire station and fitted in another in 1976. The cord was severed out of fear that unscrewing the bulb would break it, and it was moved with a full police and fire truck escort, under the watch of Capt. Kirby Slate. It got but 22 minutes of rest during the ordeal.

The bulb is an improved incandescent lamp, invented by Adolphe A. Chaillet, and produced by the Shelby Electric Co. It is a hand-blown bulb with carbon filament. The light continues to confound scientists from across the country who have been unable to explain how it has managed to continue to glow for so long. [Upgrade Your Light Bulbs and 14 More Ways to Save Energy and Money]

According to a website dedicated to the bulb, www.centennialbulb.org, Debora Katz, a physicist at the US Naval Academy in Annapolis, Md., has conducted extensive research into the Livermore light bulb's physical properties, using a vintage light bulb from Shelby Electric Co. that is a near replica of the Livermore light.

Katz says she will test the filament of a broken vintage Shelby light bulb at the US Naval Academy's particle accelerator to learn more about its properties. "It is possible that the Livermore light bulb is one of a kind."

The bulb has a dedicated live webcam that refreshes every 10 seconds, which you can see here.