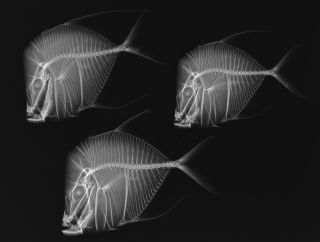 It's not hard to see where this fish gets its name. A sloped head makes the lookdown fish look like it's always, well, looking down. Lookdowns like shallow waters in the western Atlantic.
(Image: © Sandra J. Raredon, Division of Fishes, National Museum of Natural History, Smithsonian Institution.)

If you've always thought of fish bones as an annoying barrier to enjoying a salmon fillet, think again. An upcoming exhibit by the Smithsonian Institution reveals the diverse skeletal structures of marine animals from eels to seahorses in beautiful black-and-white.

The X-ray images, set to premiere at the Yale Peabody Museum of natural History in New Haven, Conn., on July 2, are part of the Smithsonian Institution's research on fish evolution. By peering inside the fish without cutting them open, scientists can study the animals' undisrupted skeletons. X-rays may also reveal other hidden details, including undigested food in a fish's stomach. [Slideshow: Fish in X-ray Vision]

The travelling exhibit features 40 dramatic X-rays, laid out from evolutionarily primitive jawless hagfish to complex, spiny-finned species like the striped bass. The exhibit will remain in New Haven until Jan. 8, 2012, when it will embark on a 10-city tour that will last until 2015.