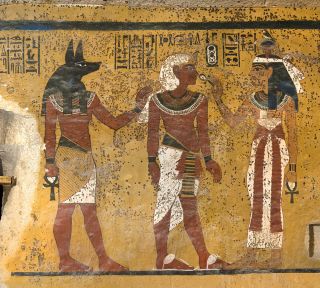 The spots offer insight not only into the boy king's death, but also into the haste of his burial, according to researcher Ralph Mitchell, an expert in cultural heritage microbiology at the Harvard School of Engineering and Applied Sciences.

When the Egyptian Supreme Council of Antiquities asked the Getty Conservation Institute to investigate whether the spots signaled the tomb's deterioration, they turned to Mitchell. Combining classical microbiology with DNA analysis, he studied the mysterious dark spots that have seeped into the tomb's paint and plaster.

Meanwhile, chemists at the Getty Conservation Institute identified the spots as containing melanins, which are the characteristic byproducts of fungal, and sometimes bacterial, chemical reactions of metabolism. No living organisms have yet been matched to the spots, and the identity of the microbe remains a mystery.

"Our results indicate that the microbes that caused the spots are dead," study researcher Archana Vasnathakumar, a postdoctoral fellow in Mitchell's lab, said in a statement.

Photographs taken when the tomb was first opened in 1922 show that the spots have remained unchanged over the past 89 years. This evidence not only suggests that the microbes are not growing but that they may hold clues to King Tut's death. [10 Weird Ways We Deal With the Dead]

The young Egyptian pharaoh of the 18th Dynasty died in his late teens from yet unknown circumstances, although various theories propose that he died from a head injury, an infected broken leg, malaria, sickle-cell anemia or a combination of illnesses.

The spots' presence points to the possibility that he received an unusually rushed burial.

"King Tutankhamen died young, and we think that the tomb was prepared in a hurry," Mitchell said. "We're guessing that the painted wall was not dry when the tomb was sealed."

The moisture from the paint, combined with the food and incense traditionally buried with the mummy, would have provided the perfect environment for microbial growth until the tomb eventually dried out, according to Mitchell.

Since the spots appear to be caused by ancient microbes that are unique to the site, the conservators aren't likely to remove the spots anytime soon.

"This is part of the whole mystique of the tomb," Mitchell said.