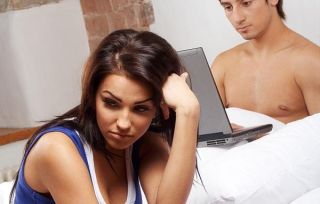 Sexuality in the Digital Age can mean sexting on smartphones, hookups through Craigslist and Facebook, and transmitting lewd photos like Anthony Weiner or Brett Favre. But while humans continue to define the do's and don'ts of online lust, a new generation of computer programs may have already figured it out. Thanks to advances in artificial intelligence, a scandal like Anthony Weiner's doesn't even necessarily need two humans anymore.

"I did find people who were interested in artificial boyfriends and girlfriends, in artificial spouses," Turkle told InnovationNewsDaily. "They were not being ironic. They felt that people had failed them. And that a robot would be a safe choice."

Such "seduction by social robots" forms a key theme in Turkle's latest book, "Alone Together: Why We Expect More from Technology and Less from Each Other" (Basic Books, 2011). She found that some people can desire what robots offer — either in virtual form or as crude sex bots — even if it marks a step below emotional fulfillment with other human beings.

Virtual girlfriends and boyfriends already abound in Japan, where dating simulator games have enjoyed popularity among females as well as males. One young Japanese man even held a real-world, live-casted commitment ceremony with his virtual girlfriend from a dating sim called "Love Plus," which has sold hundreds of thousands of copies on the Nintendo DS handheld game console since 2009.

"In Japan, men do have virtual girlfriends — it is a phenomenon — indeed, there are even resorts that are dedicated to be places where one can go on 'vacation' with these fantasy women," Turkle said.

A virtual companion may seem like a boon for the lonely, whether controlled by humans or AI. But their total availability represents a futuristic, mine-filled Candy Land for people in real relationships, and especially for people such as Weiner who may thrill in the virtual hunt rather than actual sexual acts, said Robert Weiss, founding director of The Sexual Recovery Institute in Los Angeles.

"The biggest issue technology has created for people with compulsive sex issues is easy access," Weiss said in a phone interview. "It's like having cocaine in the medicine cabinet."

Definitions of infidelity have evolved alongside technology for psychologists such as Weiss. Once, people identified infidelity by obvious signs such as lipstick on a shirt. Now Weiss defines infidelity not by sexual acts, but by the act of keeping secrets in a relationship.

In that sense, it matters less about whether a politician such as Weiner sent lewd photos to real women or to computer agents posing as virtual humans online. What matters is whether he maintained honesty between himself and his wife.

But even a relationship where the wife agrees to her husband's online antics may suffer. Weiss doubted that the American public would be any more forgiving of Weiner if the New York congressman had done his online deeds with virtual women, rather than with the real women he contacted.

"As a private citizen, he can do whatever he wants," Weiss said. "As a public official, he has an obligation to meet the bare minimum standards, like not hurting his pregnant wife with his behavior."