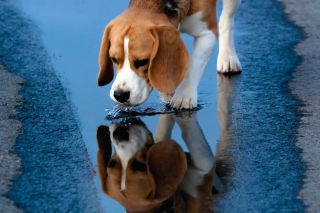 Despite previous suggestions that cats are daintier drinkers than dogs, a new study finds that canines use the same techniques as kitties to guzzle liquids.

Like cats, dogs depend on the adhesive properties of water to lap the liquid into their mouths. And though the process in dogs is a bit more slobbery than it is for cats, both animals use the tongue like a conveyer belt to transports dollops of water to the throat.

"We were able to show once the liquid got into the mouth, how it was transported through the mouth to be swallowed," study researcher Alfred Crompton, of Harvard University's Museum of Comparative Zoology, told LiveScience. [Watch X-ray video of a dog drinking]

Crompton and his Harvard colleague Catherine Musinsky got the idea of looking at dog's drinking habits when two Massachusetts Institute of Technology researchers showed them their data on how cats drink. That study found that cats first touch the tip of their tongue to the surface of a liquid. The liquid adheres and stretches into a long column, around which the cat then snaps its jaws. Based on slow-motion videos of dogs drinking, the researchers believed that dogs use their tongues as ladles, scooping water willy-nilly.

But Crompton and Musinsky had access to better tools than regular video: They could use high-speed X-ray video to see inside an animal's mouth while it was drinking.

"We thought, 'How about looking at dogs?'" Crompton said.

The researchers recruited Matilda, Crompton's Portuguese water dog, who was all too happy to lap broth in the name of science. Using both regular and high-speed video, they found that dogs drink the same way cats do. Matilda extended her tongue, curling it backward and withdrawing it to pull liquid toward her mouth. The only difference between her technique and cats' was that she plunged her tongue all the way into the water, while cats just touch the liquid's surface.

"Dogs don't care," Crompton said. "They just slop it all around the place."

"This is the really cool part," Musinsky told LivesScience. "Because the tongue is maintaining contact, but it's also sliding out of the mouth."

As the dog brings another chunk of liquid up with its tongue, the tongue drops away and the first bit of liquid goes to the back of the mouth. Repeating the cycle again, the dog brings a new sip of water to the front of its mouth, swallowing the first lap of water and moving the second toward its throat.

"You've used the tongue and palate as sort of a conveyor belt," Crompton said.

Pedro Reis, an engineering professor at MIT and one of the researchers who uncovered the secrets of cat drinking, told LiveScience he was "delighted" to see the new research expanding the understanding of drinking in dogs.

"As far as lapping goes," Reis said, "this reconciliatory move between felines and dogs is fascinating."

The researchers reported their results in the journal Proceedings of the Royal Society Biology Letters.