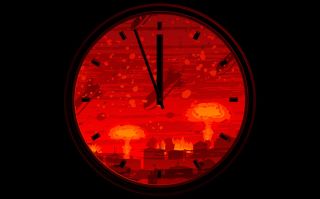 So far, so good. No major global earthquake. No airline pilots or critical military personnel suddenly abandoning their posts to ascend into heaven. No rapture. No Apocalypse. No doomsday.

There's still time, of course. Harold Camping's prediction of Rapture today could still come, but time seems to be running out on this round of the beginning of the end of the world.

Camping had predicted that 200 million believers — about 3 percent of the world's population — would disappear today. Those left behind would face 5 months of living hell. So far, the only reported disappearances involve attempts at humor called "rapture bombing," in which people set clothes out to give the impression of a body gone; seems there's always someone conveniently there to snap a picture and post it on Flickr.

But don't worry. History suggests there will be more doomsdays. In fact, the next one is predicted for December 2012.

Meanwhile, psychologists and Christians alike say one of the significant problems if Rapture doesn't occur today will be the disappointment and disillusion felt by Camping's followers, like the parents in Middletown, Md. who are expecting to leave their three children behind today.

Our Full Coverage of today's event, or non-event, as it may be: