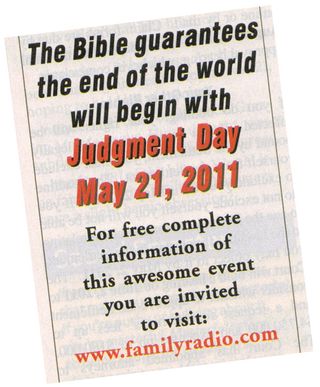 A portion of an ad on page 176 of the April issue of Reader's Digest tout's Harold Camping's prediction for this fateful Saturday, along with an invitation to the website where a countdown clock confirms time is running out.
(Image: © LiveScience scan)

With the end of the world looming this Saturday (May 21), non-believers are planning "Rapture parties" to poke a little fun at the Doomsday prediction and also raise awareness for other causes.

Harold Camping, 89-year-old leader of the ministry Family Radio Worldwide, has predicted that a five-month destruction of humanity will commence Saturday with a Rapture, in which believers will ascend to heaven. "Whereas this five-month period will be an enormous horror story for those who have not been raptured, it will be a time of great joy and wonder for those who are raptured," according to the Family Radio website. [Infographic: A Brief History of Doomsday]

Camping uses a mathematical formula linked to prophecies in the Bible. He once predicted Sept. 6, 1994 as Judgment Day, but that math didn't quite work out. This time around, Camping's organization took out an ad in Reader's Digest, stating: "The Bible guarantees the end of the world will begin with Judgment Day May 21, 2011."

A Web group called TalkAndAct.com is sponsoring a Rapture party because "skeptics, activists, comedians and others don't believe his apocalyptic warning for one second," organizers said in a statement Wednesday. The live streaming "Judgment Day Party" will start at 00:00:01 on May 21 and run until midnight, other events permitting, of course.

In Tacoma, Wash., producers of a local talk show "Ask the Atheist" will sponsor a Rapture party themed "Countdown to Backpedaling: The End is Nah!"

A group called American Atheists has a short list of Rapture parties occurring in a handful of other cities.

Might the world really begin to end this weekend? Even many Christians aren't buying it.

"There are a long line of brilliant people who, through intricate calculations, have made predictions about the end of the world," Pastor Joseph Fuiten with Cedar Park Assembly of God Church in Bothell, Wash., told the Seattle Times. "Unfortunately they have overlooked the obvious words of Jesus: 'You do not know the day or the hour' of such events."