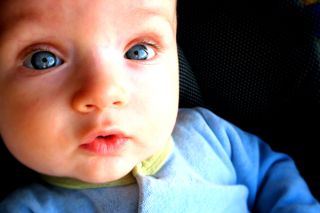 The researchers analyzed about 100 baby products that contain polyurethane foam, including car seats, changing tables, nursing pillows, high chairs and strollers. They found 80 percent contained fire retardants. The most commonly detected fire retardant, known as TDCPP, has been shown in animal studies to cause cancer and was removed from children's pajamas in 1977.

A small percentage of the products contained a class of fire retardants, called penta brominated diphenyl ethers, or PBDEs, that was phased out in use in the United States in 2004 due to safety concerns, meaning it's now illegal to use in consumer products.

The study also found two types of flame retardants that had not been previously identified in consumer products or the environment.

"Flame retardants that either lack information [about their safety] or are known to be toxic are present at high levels in baby products," said study researcher Arlene Blum, executive director of Green Science Policy Institute, a nonprofit organization that provides information on chemicals in consumer products.

The researchers estimate babies may be exposed to levels of TDCPP that exceed those recommended by the Consumer Product Safety Commission. Infants' bodies are smaller than children's bodies, and they generally spend an extended amount of time around these products (such as car seats and nursing pillows).

More work is needed to determine whether infants' exposure to these substances actually causes harm, the researchers say in the May 18 issue of the journal Environmental Science & Technology. And while manufacturers seem to be trying to meet safety standards, use of flame retardants in consumer products may be superfluous and regulation too lax.

Flame retardants are added to numerous products to meet anti-flammability standards and reduce the risk that the material will catch fire. Earlier studies on PBDEs found these chemicals can leach from products and build up in human tissue. Studies on animals, and a limited number of human studies, suggest PBDEs can cause neurodevelopmental problems and thyroid problems.

After PBDEs were banned in 2004, manufacturers began using alternatives, whose health effects haven't been well-studied. But until now, the extent and types of flame retardants in baby products wasn't known.

To find out, the researchers solicited samples of baby products from volunteers, resulting in donations from 13 U.S. states.

In some cases, levels of TDCPP were up to 12 percent of the weight of the foam. The concentrations of TDCPP and PBDE in the baby products were similar to those found in previous studies of furniture. The Consumer Product Safety Commission says flame-retardant levels in furniture may pose a hazard to consumers.

The study identified a widespread prevalence of flame-retardant chemicals in products you might not expect (such as nursing pillows), said Phil Brown, a sociologist and environmental health researcher at Brown University, who was not involved with the study.

"Many people think we're putting too many flame retardants in too many products," Brown said.

Brown notes flame retardants are added mainly to stop products from burning if a room or building is on fire. He said flame retardants in products such as changing tables might not be necessary because they are only utilized for short stints of time during diaper changes.

"If there's a fire in the building, you want to get out, not worry about if that thing is going to burn," he said.

Parents should try to avoid buying baby products that have polyurethane foam and a TB117 label, which indicates the product meets the flammability standards set by the California Technical Bulletin 117. These products are likely to contain flame retardants even though they likely don't pose a fire hazard, the researchers say. Parents should consider using products that instead use polyester, down, wool, or cotton, which are less likely to contain flame retardants, they say.

Pass it on: Flame retardants that have been linked with cancer are present in baby products. However, the hazards to infants from these products remains unclear.