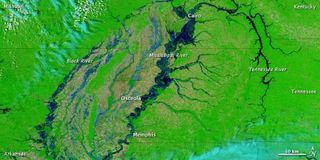 This image, acquired on May 5, 2011, shows the substantially swollen river, from north of Cairo to south of Memphis.
(Image: © NASA.)

The swollen Mississippi River is sending surging waters over farmlands and residential areas in some of the worst flooding the river has seen along its lower half in recorded history.

"I've never seen it this high," said Charles Camillo, longtime river historian with the Mississippi River Commission and the Mississippi River & Tributaries Project. "The idea of the Cairo gauge ever hitting 60 to 61 feet [18 meters] just seemed so far-fetched to me. It's such a staggering number."

Although parts of the central United States were deluged with record rains this April, sending torrents of water into a Mississippi already swollen with snowmelt, weather is not the sole scapegoat for the massive floods, some experts say. A combination of geography and human intervention also play a role in the catastrophic flooding. Just how large a role each factor plays is a matter of debate.

Blame it on the drain

The Mississippi River takes on water from a vast area. Its watershed is the fourth largest on the planet, covering a 1.2 million square mile (3.1 million square kilometers) swath across 31 states. In fact, rain and water from as far away as the Rocky Mountains in the west and the Allegheny Mountains in the east make their way to the Mississippi through a massive network of 250 tributaries.

This means that the river feels the effects of events not only close by, but from far-flung spots as well, since rain that falls in the Dakotas can eventually end up in the Mississippi.

Exactly how much of that rain ends up in the Mississippi has changed over the decades because of changes wrought on the land itself, according to hydrologists and engineers.

One major factor at work is a seemingly innocuous one: concrete. Arthur Schmidt, a hydrologist and engineer at the University of Illinois, said paving over soil that would naturally absorb rainwater means that water has to go somewhere else — into the efficient network of drainage pipes beneath cities and towns that keeps streets dry.

"That issue of paving our towns isn't just right by the river, it's anywhere that you have a stream that eventually connects to that river, which is a huge portion of the country," Schmidt said.

Although the system makes life easier, there's a tradeoff.

"Most years, it's a good thing. We're feeding a tremendous amount of people," Schmidt said. "But a year like this, where it just won't quit raining, you have to look at what effect it has on the river, and how do you weigh the benefits and costs."

Levees can also play a role in the might of Mississippi floods. And some who study the river say the network of earthen walls designed to keep the river at bay is largely to blame for what some see as an increase in the frequency and magnitude of flooding along the river.

"We've messed with our rivers," said Robert Criss, a professor in the Earth and planetary sciences department at Washington University in St. Louis. "They're constricted with levees, we squeeze the water in, it's got nowhere to go except for higher and higher up."

However, others say the issue is more nuanced. Schmidt says it is true there is a kind of catch-22 at work. As we build more and more levees, the river is squeezed a little bit more, and does indeed rise incrementally when the river is flooded.

"If you squeeze it down, it has to go both faster and deeper," Schmidt said. Yet the levees do perform a crucial duty if you live or farm near the river, Schmidt said.

"As an engineer I hate to say it, but sometimes when we solve a problem, we may create another problem, and it really comes down to a societal decision," Schmidt said. "Is the good from protecting these fields so we can get the benefit most years — does that outweigh that in these very extreme events it's causing some things to get worse?"

Camillo, whose organization is a part of the U.S. Army Corps of Engineers, said that although the levees may pinch the river higher, there are solutions in place to deal with the high waters.

He pointed to the recent blowing of the levees along portions of the river to allow floodways to do their work and take pressure off the river, and highlighted the role of reservoirs dotted along the length of the Mississippi that act in a similar fashion.

"The question you have ask yourself is, is it OK to increase the height of a flood if you keep it confined. You've got to be smart with your planning," Camillo said.

Although Camillo said it was heart-wrenching to see farmlands flooded when the levees were blown, he said so far all the levees built by the federal government are holding. Some may overtop, Camillo predicted, but said that so far the levee system is doing its job.

"It's saving a lot of property, and it's probably saved lives," Camillo said. "It's working and we're praying and watching and hoping that it continues to be that way as this wave of water moves down to the Gulf."