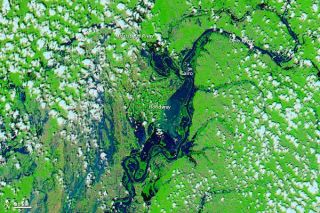 Flooding near Cairo, Ill., after the levee blast on May 2.
(Image: © MODIS Today/Space Science and Engineering Center, University of Wisconsin-Madison.)

This year's massive flooding along the Mississippi River is the result of unfortunately timed rainfall and still melting snow. The overwhelmed river has already set several records, and more may be on the way.

Earlier this week, the U.S. Army Corps of Engineers blasted a Mississippi River levee upstream of Cairo, Ill., to save the town from flooding. The plan seems to have worked. Water at the point where the Ohio River meets the Mississippi has dropped 1.7 feet (0.5 meters) since the blasting, down from a record 61.72 feet (19 m),but flood fears remain farther south. With more rain on the way next week, every ingredient for major flooding  is coming together at once along the Mississippi River.

"It's spring, you know," said Danny Gant, a meteorologist with the National Weather Service in Memphis, Tenn. "It just happens that all the timing is right this year."

When it rains, it pours

The entire month of April has been sopping wet across the Midwest — as much as triple a normal season's rainfall has fallen in southeastern Illinois towns such as Cairo, according to the National Weather Service. Downstream, Memphis has seen 11 inches (28 centimeters) of rain since April 25, and the city is expecting more next week.

"We've had just rain after rain over the past two weeks," Gant told OurAmazingPlanet. "Plus, it's timing with the snowpack melt to the north."

That heavy snow leftover from this past winter has been pouring into the Mississippi River and its tributaries farther north. All that water is rolling downhill, with the heavy rainfall piling on.

"It's really a combination of all of the above," Gant said.

Several towns along the Mississippi River and its tributaries have set water-level records, and there is some speculation that this year could rival the 1927 Mississippi River flood, the worst in U.S. history. Towns that have set records so far:

In Memphis, water levels are expected to crest at 48 feet (14.6 m) on May 10, just shy of the 48.7-foot (14.8 m) record set in 1937. Flash flooding is already happening along local tributaries and evacuations are under way. The flood threat is expected to continue into Mississippi and Louisiana, according to forecasts by the Lower Mississippi River Forecast Center.