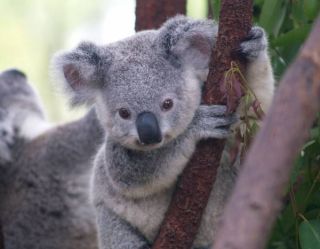 What's a forensic investigator's worst nightmare? Hint: It's a whole lot cuter than whatever you were imagining.

A crime in a zoo's koala cage would probably confound the efforts of even the best detectives. Why? Because koalas, doll-sized marsupials that climb trees with babies on their backs, have fingerprints that are almost identical to human ones. Not even careful analysis under a microscope can easily distinguish the loopy, whirling ridges on koalas' fingers from our own.

Koalas aren't the only non-humans with fingerprints: Close human relatives such as chimps and gorillas have them as well. The remarkable thing about koala prints is that they seem to have evolved independently. On the evolutionary tree of life, primates and modern koalas' marsupial ancestors branched apart 70 million years ago. Scientists think the koala's fingertip features developed much more recently in its evolutionary history, because most of its close relatives (such as wombats and kangaroos) lack them.

For centuries, anatomists have intensely debated the purpose of fingerprints. According to the team of anatomists at the University of Adelaide in Australia who discovered koala fingerprints in 1996, koala prints may help explain the features' purpose. The clue lies in our shared way of grasping.

"Koalas … feed by climbing vertically onto the smaller branches of eucalyptus trees, reaching out, grasping handfuls of leaves and bringing them to the mouth," the researchers wrote in their landmark paper. "Therefore the origin of dermatoglyphes [fingerprints] is best explained as the biomechanical adaptation to grasping, which produces multidirectional mechanical influences on the skin. These forces must be precisely felt for fine control of movement and static pressures and hence require orderly organization of the skin surface."

Humans and chimps grasp; koalas grasp -- to do so, it helps to have fingerprints.