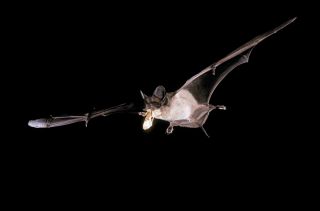 Rain can be a bummer when it comes to travel plans, but for bats, rain also can be costly. When their fur gets wet, they expend twice the energy during flight, one reason they avoid leaving their nests to find food during rainstorms.

"The bats are not protected by feathers from rain, so we thought they might capture more moisture than birds' feathers," said study researcher Christian Voigt, at the Leibniz Institute for Zoo and Wildlife Research in Germany. "This could explain why bats forage less often in the rain."

When bats fly, they expend about 10 times more energy than when they are still. With the addition of a wet coat, this increases to 20 times more energy. For comparison, during active exercise, humans might bump their metabolism up to about five times their resting rate.

"I would imagine they cannot do this for a very long time — all the food they need for the metabolism is depleted. Maybe they get weaker and weaker and they need to rest," Voigt told LiveScience.

The researchers analyzed the metabolism of wild bats caught in Costa Rica, comparing dry bats with wet bats. The bats' coats were moistened with water by the researchers. The researchers only saw this doubling of the metabolic rate in the wet bats, regardless of whether simulated rain was used in addition to wetting their coats.

The wet bats didn't weigh any more than the dry bats, suggesting any increase in flight energy costs involved another factor, such as the bats' need to regulate their temperature, the researchers hypothesize. As the water evaporates from their coats, it takes some of their body heat with it — the same reason behind sweat's ability to cool. Because the bats' hairs clump together when wet, the water may have also interfered with their aerodynamics.

It's likely that rain would have an effect on the bats' ability to find prey by interfering with their echolocation (when bats use sounds reflected off their surroundings to "see" in the dark), but this is difficult to study because of the incompatibility of microphones and water, the researchers say

"This is a very elegant and interesting experiment which shows that bats should avoid rain and seek shelter to stay dry, not only because being wet cools them off, but also because it may affect their aerodynamics, and thus make flight more costly," Christopher Guglielmo a researcher at the University of Western Ontario who wasn't involved in the study, wrote in an email to LiveScience.

It's possible that different species of bats have developed different ways of coping with these increased energy costs, possibly by adapting their hairs or developing a coating to help shed water, though these haven't been studied.

The study was published today (May 3) in the journal Proceedings of the Royal Society B: Biology Letters.