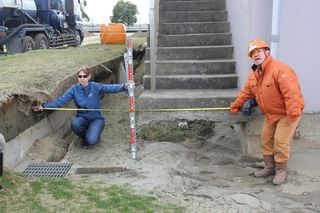 The scale of Japan's March 11 earthquake and tsunami wasn't the only thing that surprised geologists.

The 9.0 earthquake in Japan — the fourth most powerful quake ever recorded — also caused an unusually severe and widespread shift in soil through liquefaction, a new study suggests.

Near coastlines, harbors and rivers, earthquakes can make the wet, sandy soil jiggle, turning it temporarily from a solid to a liquid state, a process known as liquefaction. Heavy sand and rock sinks, while water and lighter sand bubble to the surface. The slurry spreads, often toward the water, and the surface shifts.

Japan's liquefaction occurred over hundreds of miles, surprising even experienced engineers who are accustomed to seeing disaster sites, including from the recent earthquakes in Chile and New Zealand.

The study raises questions about whether existing building codes in other vulnerable locations can enable structures to withstand massive liquefaction, including in areas of Oregon, Washington and California.

"We've seen localized examples of soil liquefaction as extreme as this before, but the distance and extent of damage in Japan were unusually severe," said Scott Ashford, a study team member from Oregon State University.

"Entire structures were tilted and sinking into the sediments, even while they remained intact," said Ashford, who is based in Corvallis, Ore. "The shifts in soil destroyed water, sewer and gas pipelines, crippling the utilities and infrastructure these communities need to function. We saw some places that sank as much as 4 feet," or 1.2 meters.

The duration of the Japanese earthquake, about five minutes, could be the key to the severity of the liquefaction and may force researchers to reconsider the extent of liquefaction damage possible.

"With such a long-lasting earthquake, we saw how structures that might have been okay after 30 seconds just continued to sink and tilt as the shaking continued for several more minutes," Ashford said. "And it was clear that younger sediments, and especially areas built on recently filled ground, are much more vulnerable."

An event almost exactly like Japan's is expected in the Pacific Northwest from the Cascadia Subduction Zone, and the new findings make it clear that liquefaction will be a critical issue in the young soils there.

"Young" sediments, in geologic terms, are those deposited within the past 10,000 years or so. In Oregon, for instance, that describes much of downtown Portland, the Portland International Airport, nearby industrial facilities and other cities and parts of the Willamette Valley.

About 1,100 bridges in Oregon are at risk from an earthquake on the Cascadia Subduction Zone, according to the Oregon Department of Transportation. Fewer than 15 percent of them have been retrofitted to prevent collapse.

Some damage may be reduced or prevented by different construction techniques or retrofitting, Ashford said. But another reasonable goal is to at least anticipate the damage — to know what will probably be destroyed, make contingency plans for what will be needed to implement repairs, and design ways to help protect and care for residents until services can be restored, the researchers say.