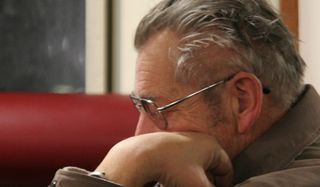 More research is needed to find out what exactly it is in the blood that seems to influence the body's circadian clock.
(Image: © Derek Jones | Stock Xchng)

Hormones that circulate in the blood could explain why older people have different sleep patterns than younger people, a new study suggests.

The body's circadian clock is determined by the expression of the circadian genes in the body's cells, and the time for sleeping and waking are indicated by peaks in expression of these genes, the study said. Older people tend to have an earlier peak expression over a 24-hour period than younger people, which explains why they tend to go to bed earlier and wake up earlier.

Scientists found they could manipulate the circadian clocks of skin cells from younger people to behave like those of older people, by growing those cells in the blood serum of older people, said study researcher Steven A. Brown, of the Institute for Pharmacology and Toxicology at the University of Zurich in Switzerland.

This finding suggests some hormone or other circulating molecule in the blood of older people has the ability to influence the cells' circadian clocks, he said.

"A gene that had a peak expression at a particular time in cells from younger individuals might have this peak two hours earlier in the presence of serum from older individuals," Brown told MyHealthNewsDaily.

The study was published today (April 11) in the journal Proceedings of the National Academies of Sciences.

Scientists grew skin cells from people in their 20s and people in their 60s in regular bovine serum cultures, and then in cultures made of blood serum from the 60-year-olds, according to the study.

They found that the cells from the 20-year-olds behaved like those of the 60-year-olds when they were grown in the blood serum.

"Human behavior shifts because activities normally done at one time of day” — like waking, eating or sleeping — “are now done earlier or late," Brown said. "Cellular 'behavior' shifts in the same way: Something that the cell normally does at one time of day is done instead at another."

Secrets of the skin cells

Scientists have long known that skin cells have clocks that genetically mirror their owners, he said.

"I can say whether you are a 'lark' or an 'owl' simply by looking at your skin cells," Brown said. But "what is new here is that blood serum from older individuals makes cells from younger people 'behave' as if they were old."

Other factors also could account for the earlier sleep schedules of elderly people, he said.

For example, elderly people may be exposed to less sunlight or may spend less time outdoors than younger people, which could have an impact their circadian clocks. Or, it's possible that the blood-circulating molecule is somehow tied with these factors to influence sleep and wake cycles, he added.

Pass it on: Older people tend to sleep and wake earlier than younger people, and the reason could lie in their blood.