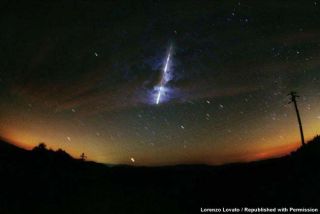 Spring has arrived in the Northern Hemisphere, which means that birds are chirping, flowers are blooming — and fireballs are lighting up the sky, NASA says.

For some mysterious reason, the number of fireballs — dramatic meteors that blaze brighter than any planet when they burn up in Earth's atmosphere — peaks at this time of year.

"Spring is fireball season," said Bill Cooke, of NASA's Meteoroid Environment Center, in a statement. "For reasons we don't fully understand, the rate of bright meteors climbs during the weeks around the vernal equinox." [Spectacular Leonid Meteor Photos]

Most of the year, a person gazing skyward from dusk to dawn can expect to see about 10 random — or "sporadic" — fireballs, researchers said. These bright shooting stars result when space rocks — fragments of broken asteroids and decaying comets — plow into Earth's atmosphere.

But in spring, the number of sporadic fireballs climbs by 10 to 30 percent.

"We've known about this phenomenon for more than 30 years," Cooke said. "It's not only fireballs that are affected. Meteorite falls — space rocks that actually hit the ground — are more common in spring as well."

The reasons for the surge of fireballs and meteorites remain mysterious — especially considering that the number of ordinary meteors peaks in the Northern Hemisphere's autumn season. At that time of year, Earth seems to sweep up a higher number of space rocks, and skywatchers can see dozens of normal-brightness meteors per night, researchers said.

"Autumn is the season for sporadic meteors," Cooke said. "So why are the sporadic fireballs peaking in spring? That is the mystery."

Some scientists think that the meteoroid population along Earth's orbit might vary with time, with a peak in big fireball-producing space rocks coming around spring and early summer. But more research needs to be done.

"We probably won't know the answer until we learn more about their orbits," said meteoroid expert Peter Brown of the University of Western Ontario.

Cooke is working to do just that. He's setting up a network of smart meteor cameras around the country to photograph fireballs and triangulate their orbits. Networked observations of spring fireballs could ultimately reveal their origin, researchers said.

But you don't have to know where fireballs come from to appreciate them. So go outside, crane your neck up on a clear night, and enjoy some of the blazing heralds of spring.