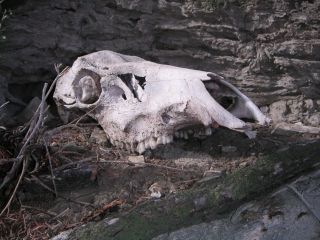 Discarded bones like this elk skull paint a picture of what Yellowstone National Park's wildlife population used to look like.
(Image: © Scott Rose)

The bleached animal skull, that icon of the Old West, could be a key to understanding how animal populations change. A new study suggests that bones of animals that died in recent decades match actual populations stretching back as much as a century.

Surveying these bones could be more useful than counting live animals when it comes to reconstructing old ecosystems, researchers reported March 28 in the open-access journal PLoS ONE.

"The skeletons of long-dead animals lying on landscapes provide critical insights into our understanding of ecosystem history," biologist Joshua Miller of Wright State University in Ohio said in a statement released by the National Science Foundation, which funded the research.

Researchers are accustomed to looking to the fossil record to reconstruct times gone by. Similarly, newer, unfossilized bones could give a glimpse into more recent history — as long as you are sure that the bones are a faithful record of the animals that died in an area, Miller wrote in PLoS ONE. [Read: Yellowstone Wolves Reintroduce 'Ecology of Fear']

Yellowstone was an ideal place to test the idea, Miller wrote, because wildlife surveys there have been very thorough. Over three years, he and his colleagues combed through the park, which predominantly lies in northwest Wyoming, counting bones and body remnants of large grazing animals, including bison, elk and moose. They surveyed along 40 narrow strips of grassland, forest, marsh and river and lakefront land, each 1 kilometer long and 30 to 100 meters wide (0.6 miles by 98 to 328 feet). They then compared their counts with recent aerial counts of Yellowstone's wildlife and with historical surveys.

Miller found that the counts didn't quite match up with modern numbers. But when he used weathering and radiocarbon dating to estimate a time of death for the animals found, the numbers matched perfectly with historical data.

"Elk, for example, were much more abundant in the 1990s than they are today," Miller said. "The bones of Yellowstone feature far more elk than one would predict based on the current Yellowstone community."

Horses were prevalent in the park in the late 1880s and early 1900s, before cars replaced them as transportation; weathered horse bones are still found in the park. By contrast, mountain goats showed up in the park in only the last 20 years; their skeletal record is almost invisible because relatively few have died so far.

Yellowstone has been a well-studied area, Miller said, so the bone surveys didn't provide much new information about its history. The next goal, he said, is to take the technique elsewhere.

"Now we can go the next step and use bone accumulations in regions we have only recently begun studying to obtain critical historical data, and establish how ecosystems have changed over the last decades, century or even longer," Miller said.