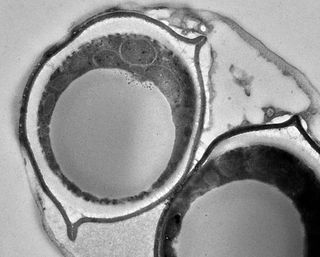 The spores of the newly discovered Ecuadorian yeast are shaped like mini Saturns, with rings around them.
(Image: © National Collection of Yeast Cultures, Institute of Food Research)

A new type of yeast sporting spores with rings around their centers, a la the planet Saturn, has come out of hiding in a cloud forest in Ecuador, researchers recently announced.

Yeasts are single-celled fungi that reproduce with various-shaped spores. The newly identified yeast now called Saturnispora quitensis was discovered growing on the fruit of an unidentified bramble collected from the Maquipucuna cloud forest nature reserve (also known as a fog forest), near Quito. [Image of Saturn-shaped yeast]

"When viewed under the microscope, its spores resemble mini-Saturns," Ian Roberts, curator at the National Collection of Yeast Cultures, Institute of Food Research in the U.K., told LiveScience.

Roberts and his colleagues have been hunting for yeast that can turn plant material into bioenergy, such as ethanol, though they aren't yet sure whether this new ringed yeast is a candidate. [New 'Gay' Yeast Discovered]

"We simply don’t know at this stage," Roberts said. "What we do know is that the discovery of each hitherto unknown species expands the gene pool from which novel characteristics relevant to bioenergy production can be selected."

The team still has approximately 300 to 400 yeasts to sift through and characterize that they collected from insects and plants in Ecuador. The findings, they say, highlight the importance of such biodiversity-rich regions for more than their iconic animals and plants, but also for these lesser-known microbes that could be used in green technologies.

The Saturn yeast is described online in the International Journal of Systematic and Evolutionary Microbiology.