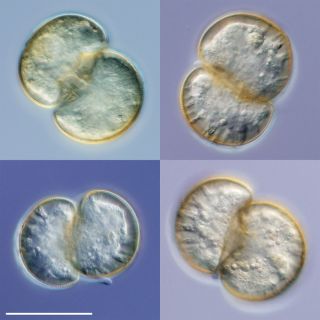 Ameoba, one of the most ancient organisms on the eukaryotic tree of life (caught here in the act), are the originators of sex.
(Image: © Daniel Lahr)

After taking a second look at the tree of life, researchers are rethinking the asexuality of amoebas, considered the epitome of chastity. They now have evidence of amoeboid sex lives, suggesting the act didn't evolve, it has always been there.

Amoebas are blob-like creatures about a billion years old ­— the oldest members of the domain of life called the eukaryotes. This group is fundamentally different in appearance and various other features from the two other domains of life. Amoeba species are spread throughout this tree on every branch, interspersed with familiar lineages like animals and plants. They are known for how they move, slowly extending foot-like portions of their cell membranes.

"It changes how we interpret the evolution of organisms," study researcher Daniel Lahr, of the University of Massachusetts, told LiveScience. "If the last common ancestor of eukaryotes was sexual, then there is in practice no evolution of sex."

By taking a sweeping look at what we know about them by searching through the scientific literature, the researchers say those amoebas are more sexually active than we think.

"When discussing the sex of amoeboid protists, the existing evidence does not evoke chastity but rather Kama Sutra," Lahr writes in the paper, published in the March 23 issue of the journal Proceedings of the Royal Society B: Biological Sciences. [Why We Have Sex: 237 Reasons Revealed]

Amoeba sex might have been missed because when grown in the lab, many of them don't show any signs of engaging in sex — they have the ability to reproduce themselves by cloning, or copying themselves, indefinitely. And when they did show signs of sex, researchers may have mistaken it for a rare exception to the no-sex rule.

This is why most researchers believe that amoebas (and all eukaryotes) evolved from an asexual ancestor.

For these lower organisms sex isn't so much an act performed between a male and a female with all the "birds and bees" complications that come with it. For amoebas, sex is a special way of dividing one's genetic material into two equally portioned doses, then combining two of these packets into a new organism. These two doses could come from the same individual or from different individuals.

When the genetic material is being divvied out it undergoes a process and switches around parts of its DNA. This switching gives the new individuals a greater diversity in their genes. They don't always reproduce using sex because in certain environments reproducing asexually can be more successful.

"The speed of dividing is immediately advantageous to the individual," Lahr told LiveScience. "But in most cases this is a condition that is doomed to extinction."

Asexuality is a losing game in the long run, because mistakes accumulate in the genome and get passed down to offspring, eventually killing them. This theory is called Muller's Ratchet, and is traditionally used to explain why sex evolved.

When the genomes are mixed up during the splitting and recombining of DNA during sex, offspring can shed these mistakes. Some asexual animals, like the bdelloid rotifer (a small multicellular animal), have developed other means to recombine their genomes and avoid the squeeze of Muller's Ratchet.

"The bring-home message to the biology community: In general, they have to look more widely than they have been if they really want to talk about theories about sex and the roles of sex," said Fred Spiegel at the University of Arkansas, who wrote a commentary about the study for the same issue.

"The last common ancestor of all living eukaryotes had to be sexual," Spiegel told LiveScience. "Sex is the rule and not the exception."