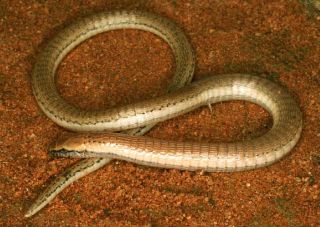 The new lizard species is adapted for savanna life. The absence of legs and the sharply pointed snout help the lizard move over the surface layer of sandy soil in Brazil.
(Image: © Miguel Trefaut Rodrigues/ USP Universidade de Sao Paulo.)

Only a fraction of the world's animal species have been identified by science, and getting to know the rest could cost about $263.1 billion, one study estimates.

So far, about 1.4 million species have been catalogued, and an estimated 5.4 million remain unknown to us, scientists say. But the main impediment to identifying these unknown creatures is a shortage of qualified taxonomists, the biologists who identify organisms and place them within related groups, write the authors, Fernando Carbayo and Antonio Marques, both of the Universidad de Sao Paulo in Brazil, in the April issue of the journal Trends in Ecology and Evolution.

Knowing the price tag will help governments and decision-makers better allocate resources, they say. [How Many Species Exist on Earth?]

They use the costs associated with describing new species in Brazil as the standard for the global estimate, because Brazil has high biodiversity and an active species-identification community. Salaries for Brazilian researchers also fall close to the average salary worldwide.

Vertebrates, with about 62,000 species known so far, are far outnumbered by their backbone-less counterparts, the invertebrates, but historically, they have received much more focus. In fact, half the world's taxonomists focus on more charismatic and visible vertebrates – think big cats and colorful birds. However, vertebrates now are estimated to make up less than 4 percent of the world's unknown animal species.

Insects dominate both the known species and the estimate of unknown species. The need for taxonomists specializing in them is enormous, the researchers write.

"A complete inventory of the animal diversity of the world might remain an elusive goal," the researchers acknowledge. "Even this considerable achievement would provide only the 'leftovers' of biological diversity after the effects of evolution and human intervention on natural habitats have been considered."