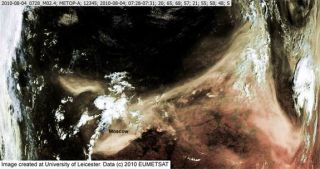 The intense heat wave that centered on western Russia last summer was truly a record breaker. It surpassed even 2003's scorcher in western and central Europe — which has been blamed for 70,000 deaths. And together, both of these mega heat waves have secured a place in the 500-year weather history of Europe, according to a new analysis.

The researchers also looked ahead, and found that a variety of different climate models predict an increase in mega heat waves similar to these in the 21st century for two regions within Europe.

Researchers, led by David Barriopedro of the Instituto Dom Luiz at the University of Lisbon in Portugal, compared this mega heat wave with the one that struck western Europe seven years earlier, and found that 2010's heat wave was not only more severe, but also covered a greater area.

For a longer historical perspective, they also looked back 500 years for Europe. Since recorded weather measurements go back only to the 19th century, they looked at reconstructions of summer temperatures made by pulling together a variety of evidence, including that from tree rings, old documentary sources and Greenland ice cores. (An atmospheric circulation pattern connects weather in Europe and Greenland, so researchers can infer conditions in Northern Europe if they know those in Greenland.)

Even taking into account the uncertainties in the reconstruction, they found that 2010 and 2003 were most likely the warmest summers since 1500. A number of other summers in the past decade were also close contenders.

"It's very difficult, if not impossible, to attribute a given extreme event, like the 2003 mega heat wave, to climate change," he told LiveScience. "What we can do is estimate what has been the contribution of humans to increase or decrease the likelihood of an analogue, an event like that."

For instance, after the devastating 2003 heat wave, British researchers led by Peter Stott, found that human activities had doubled the risk for a heat wave of the same magnitude. As for 2010's heat wave, that appears to have been caused mainly by natural, atmospheric phenomena, rather than humans' greenhouse gas emissions, wrote researchers led by Randall Dole of the National Atmospheric and Oceanic Administration (NOAA) in a study to be published in a forthcoming issue of the journal Geophysical Research Letters.

Even if we can't blame our greenhouse gas emissions for recent events, our activities do raise the likelihood of similar events in the future.

Barriopedro and his colleagues used 11 climate models to examine the outcome of a moderate scenario for greenhouse gas emissions. All models projected an increase in the frequency of mega heat waves during the 21st century in parts of Europe. In particular, they found that mega heat waves of magnitude similar to 2003 would increase by a factor of five to 10 for regions of western and eastern Europe. (The western European region included France and parts as of surrounding countries, and the eastern region included northwestern Russia and parts of the Baltic nations).

Last summer's heat wave; however, was so intense that the likelihood that these regions would suffer a heat wave of that magnitude remains fairly low until the second half of this century. That does not mean that a 2010-like event won't happen again, just that it was extremely rare, he said.

This study supports previous work that has predicted an increase in extreme weather as the Earth's surface warms, according to Barriopedro.

"Whatever the scenario you look at, you will have more frequent, more intense and longer-lasting heat waves in the upcoming decades in many places in the world," he said.

Barriopedro's collaborators are Erich Fischer of the Institute for Atmospheric and Climate Science, ETH Zurich; Jürg Luterbacher of Justus-Liebig-University in Germany; Ricardo Trigo of the University of Lisbon and Ricardo Garcia-Herrera of the Agencia Estatal de Meteorologicia in Spain.

The research will be published in the March 18 issue of the journal Science.