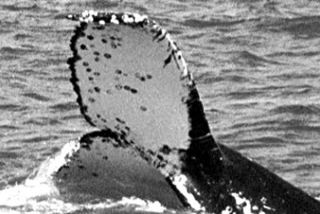 A picture taken off the coast of Brazil of the female humpback whale who migrated at least 6,090 miles (9,800 km) to Madagascar.
(Image: © Instituto Baliae Jubarte)

The endangered humpback whale was once on the brink of extinction due to the whaling practices of the first half of the 20th century. Now, thanks to international protection, their numbers have dramatically increased  to about 20,000 whales. But where they all of them went to breed during the winter has been a mystery.

The primary breeding grounds for humpback whales in the north Pacific are the main Hawaiian Islands, with 8,500 to 10,000 whales migrating to Hawaii every winter. However, researchers now find, thanks to devices that detect whale song, that these grounds extend throughout the Hawaiian archipelago into the northwestern Hawaiian Islands.

"A mystery for whale researchers has been where the whales feeding in the summer in the Bering Sea and in the Aleutians off Alaska went in the winter to breed — many just didn't show up in the known wintering grounds," said researcher Marc Lammers, a marine biologist at the University of Hawaii. "This area in the northwestern Hawaiian Islands might very well be the missing wintering ground people are talking about."

The increase in whale populations is something one definitely can hear in the ocean depths during the winter breeding season, as male humpbacks sing during courtship. All males at a wintering ground sing roughly the same song any given year, although the song changes annually. These elaborate songs might be serenades to females or ways to compete with other males.

With the aid of a network of underwater microphones known as ecological acoustic recorders, or EARs, scientists found that the humpback whale song was prevalent throughout the northwestern Hawaiian Islands.

These remote isles extend 1,000 miles northwest from the main Hawaiian island of Kauai and are rarely visited by people, especially during the winter, when the seas are very rough. Altogether, the area is part of Papahanaumokuakea Marine National Monument, one of the largest marine-protected areas in the world.

The timing and abundance of the whale songs off these islands were very similar to those seen in the main islands, suggesting the whales are using the northwestern Hawaiian Islands as wintering grounds, too.

The researchers are now analyzing the structures of the whale songs from the northwestern and main Hawaiian Islands to see if the humpbacks in this new area are an extension of the existing population or a separate breeding stock altogether.

"Understanding if they're separate populations or not is very important, as right now regulatory agencies are discussing whether humpback whales should be delisted from the Endangered Species Act or not, and they want to get a good idea of all the stocks of whales out there for such a decision," Lammers said.

The scientists detailed their findings Feb. 10 in the journal Marine Ecology Progress Series.