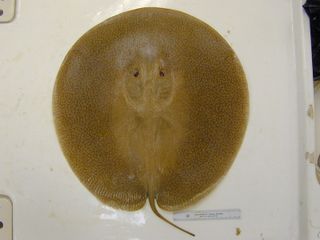 One of the new stingray species.
(Image: © Ken Jones.)

Two new species of freshwater stingray have been discovered in the Amazon rain forest.

They both look like pancakes with noses, as images of the species show. The two "pancake" species belong to the first new stingray genus found in the Amazon region in more than two decades, according to Nathan Lovejoy, a biologist at the University of Toronto in Scarborough, and Marcelo Rodrigues de Carvalho of the University of São Paolo in Brazil. [Related: Images of an Amazon Journey.]

"It took a considerable amount of time to collect enough specimens to describe the species," Lovejoy said. "They are uncommon fishes and therefore difficult to obtain."

The research team had to compete with international fish exporters for the bigger examples of the fishes.

The team's work in the Upper Amazon confirmed the new genus, Heliotrygon, and the two new species, Heliotrygon gomesi and Heliotrygon rosai. Besides their pancake-like appearance, both rays are big, have slits on their bellies and a tiny spine on their tails.

Most of Lovejoy and Carvalho's specimens came from the Rio Nanay, near Iquitos, Peru. Their discovery brings the total number of neotropical stingray genera — from an area that also includes tropical Mexico, the West Indies and Central America — to four. Before their study, the last new genus of stingrays from the Amazon was described in 1987.

"The most important thing this discovery tells us is that there are quite likely to be other large fishes in the Amazon yet to be discovered and described," Lovejoy said. "Our understanding of the biodiversity of this region is not complete by any stretch of the imagination."

The news of the new stingrays follows another discovery in the Amazon. In a previously unexplored area of the rain forest, scientists discovered a new species of catfish that has a color pattern that resembles jaguar fur.

The stingray discovery was detailed in the Feb. 24 edition of the journal Zootaxa.