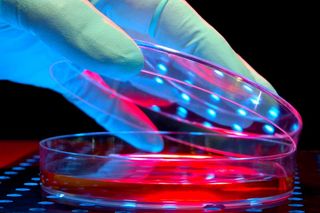 Scientists asked Pres. Obama to fund research that could lead to breakthroughs while also supporting the education of our future innovators.
(Image: © © Olivier Le Queinec | Dreamstime.com)

Using tissue from a patient's damaged urethra, researchers can grow an entirely new section of urethra and then transplant it into the patient, according to a surgeon who employed the technique on five boys.

The technique can be used to replace part of the urethra (also called the urinary tube) when it's damaged by birth defects or traumatic injury, said study researcher Dr. Anthony Atala, director of the Wake Forest Institute for Regenerative Medicine and a pediatric urologic surgeon.

The only other ways to repair a damaged urethra is "to use skin grafts, or you can use lining from the mouth," but those strategies fail more than half the time, Atala told MyHealthNewsDaily. One in 150 boys is born with a damaged urethra, which can lead to urinary problems, he said.

Atala used the lab-grown urethra technique on five young male patients whose urethras had been damaged by injuries. Six years after replacing the section of urethra that runs between the penis and the prostate, their urinary tubes remained functional and their bodies did not reject the transplanted tissue, he said.

The urethra-growth process takes six to eight weeks to complete in the lab, Atala said. Scientists first remove a piece of tissue the size of a postage stamp from the patient's damaged urethra. Then, cells from that tissue are grown on a biological "scaffold" of muscle and other types of cells for four weeks, he said.

Then, the entire scaffold is "cooked" at 98.6 degrees Fahrenheit (37 degrees Celsius), for seven days, Atala said, and the new tissue forms.

After a couple of weeks more, the scaffold is ready to implant into the patient to replace the damaged part of the urinary tube, he said.

After the structure is implanted in the patient, the scaffold dissolves, leaving only the urethra in the body, Atala said.

Three months after transplantation, the new urethras had the normal, layered structure of epithelial and smooth muscle cells, according to Atala's study, which was published online today (March 7) in the journal The Lancet.

The boys who received the lab-grown urethras reported less nighttime leaking, less straining to urinate, and fewer urinary tract infections than before the transplant surgery, the study said.

"Tubular, narrow structures are complex to build because they tend to collapse," he said.

Atala said he is currently researching how to use the technique to build more than 30 other replacement tissues and organs, including blood vessels.

Pass it on: Researchers have figured out how to make a lab-grown urethra (urinary tube) to transplant into people who have damaged urethras.