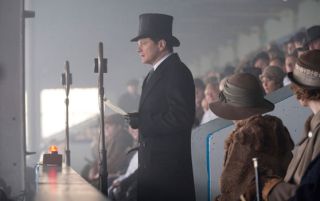 WASHINGTON, D.C. – The stammers and grimaces of stuttering take the spotlight in the "The King's Speech," a period drama that received 12 Academy Award nominations to become the most Oscar-beloved film of the year. Luckily, the movie mostly gets the facts right as it showcases how King George VI struggled with the condition in the years leading up to World War II.

Researchers remain baffled by how stuttering begins in the early years of childhood, said Nan Ratner, a psycholinguist at the University of Maryland in College Park. The condition affects just 1 percent of humans worldwide, but as many as 4 percent of people may have a childhood history of stuttering. There is no known cure for the condition.

"The King's Speech" mainly succeeds by tackling the social stigma that surrounds stuttering, as it shows the future King George VI suffering from humiliation during his public speeches before thousands of British subjects. Such shame not only causes stutterers to endure both stress and negative thoughts (such as self-doubt), but also leads them to develop counterproductive reactions as they try to speak more fluently.

"What 'The King's Speech' got right is that stuttering is a lot more than just repeating words," Ratner said. "It's very debilitating; it's actually a handicapping communication disorder."

Ratner brought up the film during a panel session on Feb. 20 called "From Freud to fMRI: Untangling the Mystery of Stuttering" at the American Association for the Advancement of Science conference held in Washington, D.C.

What the film gets wrong

But "The King's Speech" still gives way to some of the more popular myths about stuttering. It implies that King George VI's condition came about in part because of overly strict parenting and childhood trauma – two factors that don't seem to play any part in causing stuttering.

"We don't have any firm evidence that those are true at all, and a lot of counterevidence," Ratner explained. "Almost every parent asks me what they did wrong, because that has really entered the public perception of what [stuttering] is."

Of course, parents can certainly make matters worse for a stuttering child, Ratner cautioned. She emphasized that parents should seek help for their kids as early as possible.

Early treatment can make all the difference, because as many as 80 percent of stuttering kids can fully recover between the ages of 2 and 5. Still some kids may never recover despite getting treatment, given that the condition appears to have a strong genetic basis.

"We now understand that stuttering is a highly inheritable disorder, many people who stutter also have relatives that stutter," Ratner said.

The film may celebrate the triumph of the human spirit and the friendship between King George VI and his therapist, Lionel Logue, but it also acknowledges the reality that therapy for stutterers beyond the early years of childhood is necessary to help manage the condition.

"King George stuttered all his life," Ratner said. "He became a more effective speaker and an easier speaker and certainly a happier speaker, but he never really could get rid of his stuttering."

Many of the therapies shown in the film are still used today. For instance, Logue teaches the king to speak with words connected in groups, tries to desensitize him to the fear of public speaking, and even uses loud music as a distraction to mask the king's learned patterns of stuttering. He also adds a good healthy dose of self-confidence.

"The King's Speech" also touches upon the more ineffective therapies used during the time period, which included trying to speak with pebbles in the mouth and cursing up a storm to get the words out. On a positive note, Logue did recommend that the king quit smoking.

"We don't think cursing really helps you get your words out – it doesn't make you a good conversational partner," Ratner said. "And certainly at this point, we know smoking is not a good idea."