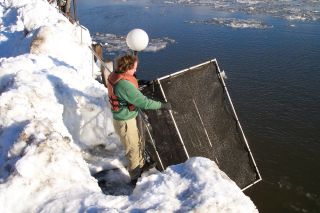 Some hardy fish bathing in toxins released by General Electric Co. into the Hudson River between 1947 and 1976 quickly evolved resistance to the poisons, researchers have found.

The research team was able to pinpoint the genetic mutation responsible for the toxic toughness in these tomcods.

The compounds in question, PCBs (polychlorinated biphenyls) and dioxin, have contaminated over 200 miles (320 kilometers) of the Hudson flowing to New York City. GE stopped the releases in 1976, when the Environmental Protection Agency started regulating the toxins. Even so, these toxins don't break down naturally, and their levels in the river weren’t reduced until dredging started in 2009.

"PCBs are a long-term problem in the Hudson River ecosystem," said lead researcher Isaac Wirgin, of the New York University Langone Medical Center. "There has been a lot of data on potential human health effects on consumption of contaminated fishes, but little ecological-effects data."

Scientists started seeing clues in the past few decades of the tomcod's shield from river toxins. The fish had much higher levels of the contaminants than other fish did, levels that should have killed them. And the fish did take a hit at first, dying far younger than normal.

These fish typically live up to about 7 years old, with the majority in the 3- to 4-year-old range. But in 1983, some 97 percent of the Hudson River tomcod population was 1 year old, only 3 percent had reached the age of 2, and many showed tumors.

It may be no surprise the tomcods were hit so hard initially, Wirgin said. Tomcods feed in the river's bottom layers, where contaminants settle, and they never swim to other bodies of water, so they don't get a break from the exposure. (In addition, tomcods spawn in the winter, which means their young are tiny and perfect prey during other fish's spring spawning time.)

However, recent, unpublished population surveys indicate that the age structure is returning to normal and the fish are living longer.

To figure out what was behind the poison protection, the researchers compared the Hudson tomcods with those from unpolluted rivers nearby. The tomcods from other rivers were much less likely to have a mutation in the gene for the aryl hydrocarbon receptor 2 (AHR2).

This AHR2 protein binds to compounds like PCBs and dioxin and transports them into a cell's nucleus, where the complex mucks with the cell's genes. The mutated form, however, makes it more difficult for this binding to occur, leading to the Hudson fish's resistance, the researchers found.

Of the tomcods in the Hudson, 99 percent had this "resistance" mutation, compared to less than 10 percent of tomcods in unpolluted rivers.

The team also found that mutated embryos collected from the Hudson were about 100 times less sensitive to the PCBs than embryos without the mutation.

Remarking on the toxin resistance, Jeffrey Levinton, a researcher from State University of New York at Stony Brook, said, "It is unusual to discover this in a vertebrate, complete with the specific mechanism.”

The finding "demonstrates the major genetic effects that toxic substances can have on aquatic ecosystems," said Levinton, who was not involved in the tomcod study.

Wirgin's group is currently studying what these mutations might be costing the fish in return for their toxin resistance. It is also looking at what effect the dredging of the river, set to resume this year, is having on the tomcod's toxin levels.

"This is the first time in these adapted populations that this has been shown," said Richard Di Giulio, a researcher at Duke University who was not involved in the study. "There are other important questions, like, 'What does selection for that genotype mean for the health and ecology of that population?' Evolutionary theory would suggest that there are likely to be fitness costs."