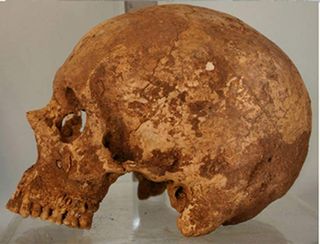 A recently unearthed human skull [image] believed to have been used as a ceremonial trophy by the people of an ancient Peruvian empire gives new insights into the nature of warfare in the society, archaeologists say.

While exploring a Wari cemetery last summer in Peru’s Huaro Valley, archaeologists discovered what they consider to be an elite section of the graveyard when they came across llama bones arranged in a special pattern, often a marker of something special when it comes to Wari remains.

Beneath the bones, the team found a skull with several unusual holes and marks that seem to indicate it was revered. Circular holes cut at the skull’s base [image] and back suggest it was held on poles or worn as a large pendant during special ceremonies.

A line cut across the front of the skull indicated that the scalp may have been removed either for cleaning or as a ceremonial vessel, and was later reattached with gold-alloy pins.

The archaeologists think the skull belonged to a warrior because of healed-over scars and abrasions on it. They estimate the warrior was about 30 years old when he died.

For his skull to be displayed in ceremonies, the man must have been a well-respected warrior.

“The trophy skull adds a new dimension to our understanding of the role of warriors and warfare in Wari culture,” said team leader Mary Glowacki of the Earthwatch Institute. The expedition  was funded by volunteers who join Earthwatch scientists on field missions.

The site of the cemetery, Cotocotuyoc, which sits high above the floor of the valley, was believed to be a last stronghold of the Wari as their empire collapsed.