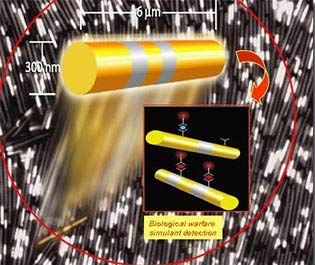 The scientists rendering of the complex nano_barcodes and the "sandwhiches" they'd look for to identify biological weapons.
(Image: © J. Tok. LLNL)

The technology would allow soldiers to use the right kind of anti-pathogen protection at just the right time.

At present, to identify biological weapons, whether a bacteria such as anthrax, a virus such as smallpox, or a toxin such as botulism, samples must be collected from the battlefield and cultured in controlled laboratories.

The new system would be very small and work virtually instantaneous, said Jeffrey Tok, a researcher at Lawrence Livermore National  Laboratory and team leader for a multi-institution group that is developing the system.

The core of this portable, lickity-split bioweapon recognition system is an amalgamation of two parts.

One is the tiny wires, which are about 250 nanometers around (about 300 times smaller than a human hair) and 6,000 nanometers long. The other is an assortment of antibodies, the proteins that the body produces to directly attack, or direct the immune system to attack, cells that viruses, bacteria, and other unpleasant intruders infect. Each type of pathogen calls for a unique antibody.

The tiny wires—made by an independent company —are electrochemically formed and then layered with bands of silver, gold, and nickel to produce patterns that are similar to the ubiquitous barcodes found on products worldwide.

"In the end you will have a pool of various striped nanowires each of which will have a unique antibody assigned to it, which is to detect for that particular pathogen," Tok explained.

To identify pathogens, millions of barcoded, antibody-carrying nanowires are floated in a neutral liquid called an assay buffer, into which samples of suspected pathogens are injected. If a pathogen (or a cell in the pathogen called an "antigen") meets its corresponding antibodies, the two will join, creating a nanowwire, antibody, antigen sandwich that will fluoresce, or glow, under a special light.

To ID the pathogens the system takes two digital mug shots in quick succession. In the first the special light is off, and the barcodes are visible. In the second the light is on and the pathogen-fingering nanowires are glowing. A computer then matches each glowing wire in photo two to its barcode in photo one.

An important advantage of the system, Tok said, is that many kinds barcoded antibodies can be mixed together in the assay buffer liquid, which can be used over and over. For the test project four types of antibodies, and corresponding barcodes, were used.

"In theory we could interrogate for as many as 100 different striped nanowires in one single snapshot," he said "That makes the analysis very fast."

The research was published in the journal Angewandte Chemie.