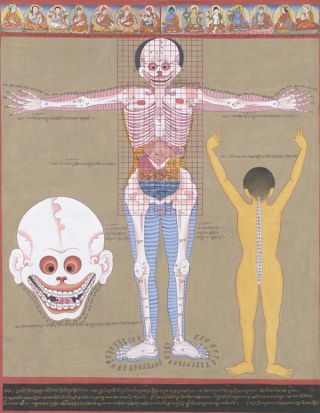 While Western medicine counts only 206 bones in an adult, 360 distinct bones are precisely enumerated in this front view of the human skeleton (plus the back view, not shown). Bones and their articulations are important in Tibetan medicine not just for their role in structuring the body but also because they form part of the pathway or channel through which the life essence flows. © Catalog #70.3/5470 Courtesy, Division of Anthropology, AMNH

NEW YORK — A drawing of a colorful tree, with the Medicine Buddha wedged above its leaves, seems more art than medicine. But this whimsical diagram provided guidance for Tibetan doctors more than 300 years ago. Its branches and leaves illustrate the humors — bile, wind, phlegm — believed to determine bodily functions and how and where disease can arise. Flowers atop this tree produce two berries that represent not only material health but also spiritual well-being and liberation associated with the attainment of bliss, the caption explains.

This and 63 other medical illustrations on display at the American Museum of Natural History in New York City focus largely on physical disease, its causes, diagnoses and treatments. However, "the spirit and mind and mental state is always part of it," said Laila Williamson, who curated the exhibit, called Body & Spirit.

Returning to health meant restoring balance among the humors, and, as another tree diagram shows, a Tibetan doctor had three tools at his disposal when investigating an imbalance: observation, touch and interviews with the patient. Other charts, with precise illustrations, explain prognoses offered by omens and dreams. There are also charts for pulse and urine analysis, anatomy and treatments.

These colorful, detailed images are actually copies of copies. The Nepalese artist Romio Shrestha and his students created them by copying older paintings likely made in the early 1900s. (The complete set has 79 paintings, not all are being displayed.) These, in turn, were based on the originals, which were painted sometime between 1687 and 1703 as illustrations to a commentary on a classic medical text called "Four Tantras." The paintings were originally commissioned as teaching aids for a medical school in Lhasa, Tibet.

"This series of paintings works with the whole set. Our body is not just a physical body or a spiritual body, our body is both spiritual and physical. It is the whole body," Shrestha told LiveScience at the opening of the exhibit here on Tuesday (Jan. 25).

"The whole idea of doing these paintings was to explain what the scientific world hasn't figured out," he said, adding that science has helped the physical body stay healthy, though is lacking in answers to questions of the spirit, mind and happiness. [5 Things That Will Make You Happier ]

The paintings on display are not exact copies of the replicas from which Shrestha worked, but were made with a different awareness and different materials, and contain more detail and color, Shrestha said.

Some of the originals still exist; however, Shrestha said he had not seen them.

The exhibition opening coincided with the start of a week-long visit by Tibetan Buddhist monks from the Tashi Lhunpo Monastery.

On Tuesday morning, the monks, dressed in orange and maroon robes, performed an opening ceremony intended to clear away negative forces and invoke the deity. In the museum's Hall of Birds of the World, the monks lined up behind a table on which they would later create a mandala. Here they played instruments and chanted in guttural voices; then, in a procession trailed by journalists and museum-goers, they traveled up two floors, through numerous galleries to the medical paintings exhibit, where the ceremony continued.

They then returned to working on the mandala, an intricate design made of sand that depicts the palace of the deity. This particular one would be dedicated to healing, and the monks would work on it for the length of their stay, destroying the design at the end of their visit, as an acknowledgement of impermanence of existence.

Gala Rinpoche, the monastery's spokesperson, described a mandala as a "GPS for the spiritual journey."

Like a GPS, a mandala — the designs for which were taught by Buddha — contains the data for a journey of exploration. [Why Are Monks So Darn Happy?]

"It's all about dealing with the mind,"  Rinpoche said.