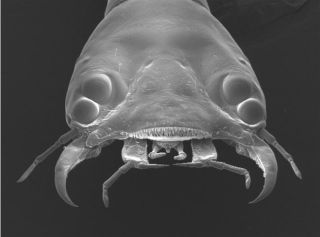 The specialized eyes let larvae of the sunburst diving beetle (Thermonectus marmoratus) switch their vision from up-close to distant in order to catch their favorite prey, mosquito larvae.

"To the best of our knowledge, this is the first demonstration of truly bifocal lenses in the extant animal kingdom," biologist Elke Buschbeck of the University of Cincinnati and colleagues wrote in the Aug. 24 issue of the journal Current Biology.

Each beetle larva has 12 eyes, two pairs of which are its primary, tubular-shaped, eyes. Focusing on one pair of primary eyes, the researchers were amazed to find hints of their bifocal abilities.

"It was my first research project, and I seriously thought I made a mistake, and then we did additional research to try to kill the hypothesis," said lead study author Annette Stowasser, a UC biology doctoral student.

She and her colleagues looked at the lenses of one pair of primary eyes through a microscope, finding the lens could make a second image grow sharper — something that could only happen with a bifocal.

Then they focused a laser beam onto certain parts of the lenses, finding that the middle and peripheral regions of the eyes operated differently. They think the central region of the lens forms the more distant image and the peripheral is used for close-up images.

They also found that each eye held two retinas, one for each focal plane (the distant and close-up).

"It's kind of like you have two eyes in the same space," Buschbeck told LiveScience. "At first we couldn't believe that's really how it works, because there is no other animal with eyes like that."

They suspect the other pair of primary eyes also has these bifocal lenses.

The results could also have practical implications for the bifocals industry. Bifocal glasses and contacts create two images that interfere with each other, creating an area of blur.

The beetle larvae solve this interference problem by having focal planes are slightly shifted so they aren't completely on top of each other.

In fact, the researchers found the shift of the focal planes improved contrast of the resulting image three-fold.