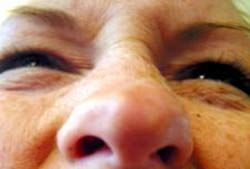 Our eyes constantly flit around, but rather than producing a shaky image like that in a jostled video camera, we perceive a coherent scene. The mechanism behind our steady view has mystified scientists for decades.

Now researchers have identified what could be the brain circuit responsible.

"People have been searching for a circuit to accomplish this stability for the last 50 years, and we think we've made good progress with this study," said Marc Sommer of the University of Pittsburgh.

Neurons in the brain's visual cortex each have a "receptive field," which is sort of like a window that sees a tiny part of the world. Scientists have known that somehow just before the eye moves from one position to another, the neuron's receptive field shifts to that location.

"The neuron can sample the same absolute position in space both before and after movement. So in this way, if the visual information at that same part of space is the same before and after the movement, then the neuron knows the world has been stable," Sommer told LiveScience.

While scientists knew this shifting phenomenon occurred, the link between the brain's visual cortex and the motor region responsible for eye movements has remained elusive. "What they didn't know is how in the world do these visual neurons know that the eye is about to move, and how do the visual neurons know where the eye is going to move," Sommer explained.

In 2002, the research team reported in the journal Science the existence of a pathway from the motor regions of the brain up to the visual system, located in the cerebral cortex.

To test whether this link functions to relay messages about eye movement, the researchers inactivated the suspected pathway in two rhesus monkeys in the new study. The neurons' receptive fields were curtailed by more than half. This indicated the pathway does influence the visual neurons to shift their "windows."

Sommer and co-author Robert Wurtz of the National Eye Institute, detailed these results in the Nov. 9 issue of the journal Nature.

A similar circuit is likely to exist in human brains, the researchers said, and could explain our steady views.

The study also provides a framework for studying a similar phenomenon in other sensory systems such as hearing. For example, even when you move your head around, you still hear sounds as if they were coming from the same place. A similar circuit could ensure the steady soundscape.