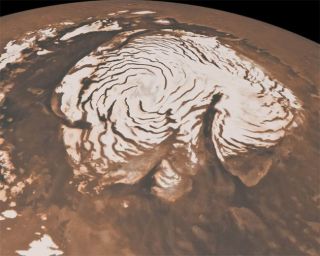 Data NASA's Mars Global Surveyor was combined to reveal this orbital view of the north polar region of Mars, including its ice-rich polar cap, which is is approximately 621 miles (1,000 kilometers) across.
(Image: © NASA/JPL-Caltech/MSSS.)

SAN FRANCISCO – Freezing temperatures can do harsh things to a living being, not excluding the tiniest microbes. But at least some may be able to survive and possibly replicate its DNA while lying dormant in icy conditions resembling those on Earth or even Mars.

A microbe can stay metabolically active enough in subzero temperatures to repair DNA damage caused by the natural decay of radioactive atoms or cosmic rays, according to recent lab experiments. The study focused on P. cryohalolentis, a microbe that has been found in both permafrost and Antarctic sea ice.

Researchers chose to test that particular bug's limits because it lacked any extraordinary ability to repair DNA or shrug off radiation.

"This organism I'm showing data for here is not extraordinary in terms of its DNA repair capacity," said Brent Christner, a microbiologist at Louisiana State University in Baton Rouge. "But if it can repair 10 base pairs [of DNA] per year, it could offset the effect that would be caused solely by, say, ionizing radiation."

If P. cryohalolentis was dormant and did not actively carry out DNA repair, it would suffer a 99 percent drop in viability from radiation alone after 600,000 years in ice, Christner explained. He presented his results here at the fall meeting of the American Geophysical Union (AGU) this week.

In the lab, P. cryohalolentis synthesized an average of 90 base pairs of DNA per day when sitting in a frozen mixture at 5 degrees Fahrenheit (minus15 degrees Celsius) over the course of 400 days. Such a temperature compares well to some warmer ice conditions on Mars, as well as on Earth.

Christner illustrated the benefits of such DNA repair by estimating long-term survival for P. cryohalolentis, common E. coli bacteria, and the radiation-resistant D. radiodurans that was discovered after it survived early irradiation testing on food in the 1930s. When P. cryohalolentis kept up repair activity even under frozen conditions resembling the surface of Mars, it easily outlasted even a dormant D. radiodurans.

Of course, such life estimates don't include the many other factors that can threaten the life of a microbe stranded in some of the harshest environments on Earth or Mars. Any bug stuck in icy solitude would eventually run up against problems such as lack of food or available water.

That's why Christner cautioned strongly against using the estimates as actual calculations of how long microbes might last in alien environments. But he was more confident in ruling out ionizing radiation as the limiting factor for microbe survival.

The study still left Christner and his colleagues wondering whether the microbe is just repairing DNA damage, or if it's also replicating DNA slowly over time to continue growing the population. An ability to replicate DNA would go hand-in-hand with the ability to repair.

"My money is on the repair, but I don't think it's impossible that these bugs could be replicating," Christner told LiveScience. "If you look at a system like sea ice, guess what? Bugs do it in ice all the time."

An answer may come with new planned experiments that try to answer the repair or replication question. Either way, the questions researchers are considering represent a huge leap over many older studies that examined microbes on ice.

"Most [past studies] assumed organisms are sitting in there not doing anything, and we know better now," Christner said. "They're doing something."

The latest study was also detailed in last month's issue of the journal Astrobiology.