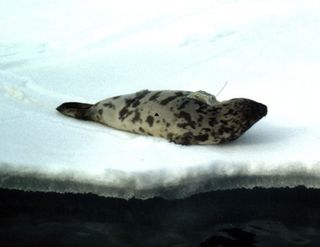 VIRGINIA BEACH, VA—While diving, hooded seals can handle oxygen levels so low they'd be lethal to humans. Now scientists are beginning to understand how they do it: The seals stop shivering and go with the chilly flow.

By switching off the shivers, which are designed to produce heat and keep a body warm, the plunging seals chill their bodies, and even their brains, to a point of hypothermia. When diving down to 3,280 feet where oxygen is scarce, the chill lowers metabolism so the animals can save on precious oxygen, explained Lars Folkow, of the University of Tromso, Norway.

The finding, presented here this week at a meeting of the American Physiological Society, could have implications for people who suffer cardiac arrest, stroke or respiratory disorders, which rob the brain of oxygen.

The researchers monitored seals [image] as they dove in tanks of water cooled to around 36 degrees Fahrenheit.  Before, during and after the dives, the scientists measured shivering, heart rate, and brain and body temperatures of the seals.

The seals shivered while on the surface but stopped or nearly stopped shivering during dives, even though their bodies continued to cool. Upon resurfacing, the seals almost immediately started shivering again.

They also found the seals' brains cooled about 5 degrees during the dives, a chilled state that requires less energy and oxygen while reducing chances of brain damage from hypoxia.

Seals are naturally built to survive the extreme conditions of deep dives, spending 80 to 90 percent of their time at sea underwater. They can store four times the amount of oxygen in their blood and muscles as humans, Folkow said. So by not shivering—an activity that requires oxygen for fuel— and slowing their metabolism, the animals extend the amount of time they can survive on oxygen stores.

Most of the time the stores may be sufficient, as the seals typically take many short dives. But sometimes seals in the wild can dive for so long that they use up nearly all of their oxygen.

"If our brain would receive arterial blood with that little oxygen, we would faint right away and we would probably experience brain damage, and may even die," Folkow told LiveScience.

"Somehow they tolerate hypoxia better," he said. "We don't know why."

Folkow and his colleagues speculate that the seals are equipped with more neuroglobin, a brain protein that makes oxygen available to brain tissues. This and other ideas remain to be tested, however.