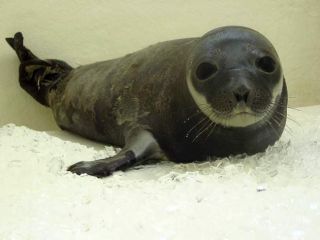 Hooded seals that normally prefer to live on ice in the Arctic region have been spotted farther south in increasing numbers, puzzling biologists.

In a typical year, 25 to 35 hooded seals might venture to the U.S. Northeast Coast and get stranded, typically in winter. Seldom are they ever spotted off the Southeast coast.

But this year, 47 have become stranded in the Northeast and eight in the Southeast. Oddly, the majority of the strandings occurred during summer. The seals have been spotted as far south as the U.S. Virgin Islands this year.

"We don't necessarily picture a hooded seal resting on a hot sunny beach in Florida, where the air temperature is still in the 90s," said NOAA Fisheries Service biologist Jenny Litz. "We get concerned when we see them out of their natural environments."

Hooded seals are so-named because they have an inflated air sac, or hood, atop their noses. Pups are typically born in March or April. After about five days, a pub is left by its mother to fend for itself. They are very solitary except when breeding and are known to migrate large distances.

Most of the strandings have involved juveniles.

Wildlife officials have been working to save the animals. Already 21 of the seals have been checked into rehab, with eight of them being released back into the wild.

A similar spike in southern strandings occurred in 2001. Scientists don't know what's going on, but they speculated Friday that thinning pack ice that breaks up early could be to blame, or perhaps the juveniles head farther south during years with high birth rates.

"Perhaps eventually, we will be able to predict these particular wander-lust years, and be able to plan accordingly within the stranding network," Malone said.