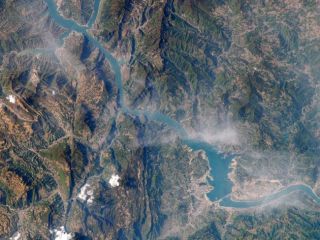 The Three Gorges Dam on the Yangtze River — the world’s largest dam — was completed in 2006, and the river is filling up its valley behind the dam to form a narrow reservoir extending more than 372 miles (600 kilometers). This image from April 15, 2009, is one of the first images that astronauts on the International Space Station have been able to capture of the flooding behind the dam.
(Image: © NASA Earth Observatory.)

The Yangtze River in China has done a good job of hiding its real age — it is nearly 40 million years older than previously thought, a new study suggests.

The Yangtze River, the third-longest river in the world at 3,915 miles (6,300 kilometers), was dated to 45 million years old, according to the study, which is detailed in the June 3 edition of the journal Geology.

The Yangtze carves through China's Three Gorges region, where previous sediment analysis dated the river to a mere one to two million years old. But these sediments must have been deposited long after the Three Gorges were initially cut, the study suggests.

For the previous sediment analysis to be accurate would mean the river would have been carved into the rocks very quickly, and this would have required extremely high incision rates, said geologist and study co-author Alexander Densmore of Durham University in England.

The new study looked at minerals in the granite that underlies the Three Gorges Dam. This granite contains the mineral apatite, whose grains would have been cooled as the river cut through it. By measuring when the rocks were cooled below a particular temperature, the research team was able to gauge when gorge incision began.

Prior work on the origin of the Three Gorges has shown that the Yangtze River most likely began as a set of small, non-descript streams that drained both west and east, out of a range of low mountains in central China.

The merger of these streams, most likely at the Three Gorges, possibly gave rise to the progressive development of a much larger, east-flowing river system that became the Yangtze River.

"The fact that erosion had removed all of the evidence of the old, pre-merger river courses made dating the river particularly difficult," Densmore said. "As the Gorges were cut, they acted as a plughole in a giant bathtub, allowing that sediment to be eroded and flushed down into the growing Yangtze River and out into the East China Sea, depositing the sediment in the lowland areas of eastern China."

Samples near the gorges showed that cooling began about 45 million years ago, whereas samples taken farther away from the river show no evidence of that cooling. Thus, the cooling must have been caused by gorge incision, rather than by more regional erosion, the study suggests.

Last year, scientists dated the Amazon River to 11 million years old, the first time its age has been determined. However, neither the Amazon nor the Yangtze are even close to the Earth's oldest river — the Nile in Africa and the New River in North America are thought to be several hundred million years old.