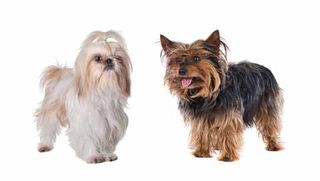 The ancestor of all those Chihuahuas, spaniels and tiny terriers likely came from the Middle East, a new study finds.

All domestic dog breeds that exist in the world today in their myriad forms are the result of the domestication of the gray wolf. And gradually, as humans selected for traits they wanted in their dogs — herding ability, particular temperaments and size — dogs diversified.

Scientists have matched one particular gene, called IGF1, to small body size in dogs. To see if this gene existed in the various gray wolf populations of the world, Gray and her colleagues compared the DNA sequences of various domestic dog breeds to gray wolves from Alaska, Yellowstone, Spain, China and Israel, among other places.

They found that the wolves didn't posses this variant of the IGF1 gene, which shows that this mutation for small body size arose after dogs were first domesticated . But because all small dog breeds have some version of this gene, it likely arose early in the history of dogs, the researchers said.

And while this gene signature was absent in wolves, the IGF1 gene found in small dogs was most closely related to genes found in Middle Eastern gray wolf populations, which suggests that small domestic dogs arose there several thousand years ago.

Previous genetic studies had pointed to other regions as the origin point of dogs; so far, this is the first to implicate the Middle East. But the Fertile Crescent in Western Asia has long been known as a point of domestication of other animal and plant species, and archaeological work has found the remains of small domestic dogs in the Middle East dating back to about 12,000 years ago.

Sites in Belgium, Germany and Western Russia have been found to contain older remains, dating to between 13,000 and 31,000 years ago, but the remains were of larger dogs.

The evidence suggests that small dogs evolved in the Middle East, but the exact progression of dog domestication is "still a little bit up in the air," Gray told LiveScience.

Reduced body size has been a common feature in domesticated animals compared with their wild ancestors, and has been seen in cattle, pigs and goats.

"Small size could have been more desirable in more densely packed agricultural societies, in which dogs may have lived partly indoors or in confined outdoor spaces," Gray said.

The study is detailed in a recent issue of the journal BMC Biology.