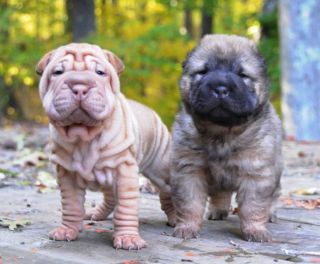 The Great Dane lumbering down the street next to the Chihuahua in its owner's purse are clear examples of the extreme variety of looks that dog species — the most diverse-looking mammal in the world — can sport.

Scientists have long been curious to understand what changes in dog genes brought about by breeding resulted in the wide spectrum of body types, coat colors, fur, and temperaments present in the more than 400 genetically distinct dog breeds today.

A new study has laid down the first pieces of this puzzle by sequencing large sections of genes from nearly 300 dogs belonging to 10 different breeds. Among the study's findings, detailed in the Jan. 11 issue of the journal Proceedings of the National Academy of Sciences, is the identification of the gene likely responsible for the exaggerated wrinkles in the skin of Shar-Peis.

Figuring out how genes in dogs are affected by artificial selection (as well as what those genes do) could help us better understand how humans were influenced by natural selection and exactly which genes perform which function in our own genome (the entire collection of human genes).

Dogs (Canis lupus familiaris) were first domesticated around 14,000 years ago, long before the field of genetics even existed, though most dog breeds were developed in the last few centuries. As humans bred dogs for features such as shorter legs or a docile temperament, they were actually tinkering with genes, while influencing the selection and expression of dog genes.

Joshua Akey of the University of Washington in Seattle and his colleagues surveyed portions of dog genomes from various breeds – including the beagle, border collie, Jack Russell Terrier, Shar-Pei and the standard poodle – to tease out which regions showed the signature of selection and which genes corresponded to certain physical traits (or phenotypes).

Previous studies of dog genes have paired genes to their resulting phenotype, for example, the stumpy legs of Dachshunds, but these studies started with the physical trait and looked for the corresponding gene or genes that coded for it. Akey's study instead compared gene regions that showed signs of change between breeds and looked for physical traits that might correspond to those changes.

The team found 155 distinct genetic locations that showed evidence of tampering from breeding. (The five genes previously linked to breed-specific differences showed up in the study, which Akey said gives the team confidence that they're seeing real effects.)

Akey and his team haven't been able to pin down the specific genes that have been changed in all of these locations, though for many they can show that a gene that can influence body size or coat color is present.

One trait they have pinpointed – the oversized wrinkles in the skin of Shar-Peis. They compared the genomes of Shar-Peis with highly wrinkled skin to those with a slightly smoother coat and found differences in that region.

From this research and further studies of the dog genome, Akey and others hope to eventually glean both a better understanding of how genes affect phenotypes (in dogs as well as humans) and what particular genes code for. In effect, understanding dogs could help us better understand ourselves.

"And that’s really the reason that people are interested in dog genetic and dog genomics," Akey said, though he added that dogs were fun to study in their own right.

The variation in dog breeds makes it easier to pin down what genes result in what phenotype.

"It's not quite the needle in the haystack problem that it is in humans," Akey told LiveScience.

Akey said that geneticists also hope to compare the signatures of artificial selection in dogs with those of natural selection in humans to see how the two processes might differ, or if they act on genes in much the same way.

Tracing the gene changes in dogs that result in the body shapes and other characteristics of particular breeds could also reveal the changes that might have led to breed-specific diseases and help scientists better understand how genetics affect disease, both in dogs and humans.

And because dogs have been bred to have certain behavioral traits (herding, hunting, companionship), "I think there are definitely going to be opportunities to learn about the genetics of behavior in dogs as well," Akey said.