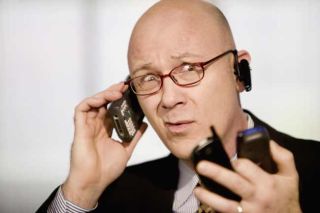 There is no plausible biological or physical reasoning for why it cell phones would cause cancer. UV, X-rays and gamma rays can cause cancer by breaking chemical bonds in DNA. Radio waves, emitted by cell phones, are not strong enough. Image
(Image: © Dreamstime)

A crowd of consumer gadgets such as cell phones and wireless devices may overwhelm the small band of scientists straining to detect faint radio emissions from offbeat sources ranging from hurricanes here to galaxies in the distant cosmos.

The "electronic fog" of manmade signals could not only dampen scientific discoveries, but also threaten passive monitoring systems vital to agriculture, transportation and national defense. Passive instruments listen for faint radio emissions from water, soil and atmospheric gases, as well as emissions related to atmospheric changes in temperature and humidity.

Now the U.S. National Research Council (NRC) has called for new rules and technologies that could strike a balance between active and passive users of the electromagnetic spectrum. Its new report, released today, recognizes the explosion of wireless devices as necessary to the global economy, and yet seeks to preserve some spectrum space for listening to the quieter signals of the natural world.

Much environmental observation relies upon detecting such quiet Earth signals that carries information about changing temperatures and water levels in the atmosphere. The U.S. alone has more than 30 satellites representing billions of taxpayer dollars that provide up-to-date information on weather patterns, planetary surface conditions and extreme events such as wildfires and hurricanes — not to mention the longer term effects of climate change.

But the electronic fog hanging over parts of North America and Europe already prevents satellites from detecting some natural signals, and renders certain data useless.

Astronomers who want to study faint signals from the heavens have also retreated out of necessity to the lonely regions of the Earth. Their radio telescopes sit in remote deserts or atop mountain peaks to study weak signals from galactic black holes and pulsars, and have provided evidence of the Big Bang by detecting cosmic microwave background radiation.

Radio telescopes could also soon provide a glimpse of the time when the first stars were born, if scientists can figure out how to listen across a broad chunk of spectrum already clogged by manmade devices.

Another part of the solution could come from technologies that allow efficient sharing of the same spectrum bands.

Cell phone networks may already hold the key to a shared approach among active and passive spectrum users, because such networks work by juggling spectrum usage among many mobile devices. A similar system could briefly interrupt or synchronize radio transmissions to allow for quick science measurements, such as when a satellite passes over a certain region.

Such changes won't happen overnight or by themselves. But at least the NRC report provides a blueprint that may allow growing demand for a wireless future to coexist with continued scientific discovery.

This article was provided by TopTenREVIEWS.com.