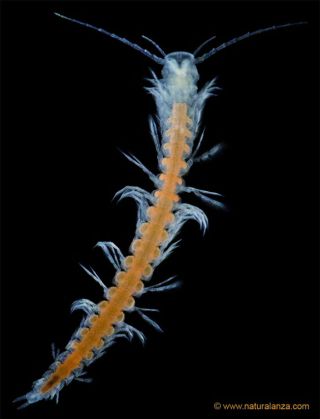 What this newly identified crustacean, called Speleonectes atlantida, lacks in eyes it makes up for with plenty of sensory hairs along its body and antennae on its head. These structures help the tiny animal "see" in its dark, cave habitat.
(Image: © Ulrike Strecker.)

A previously unknown species of an eyeless crustacean was discovered lurking inside a lava tube beneath the seafloor.

The creature, named Speleonectes atlantida, lives in the Tunnel de la Atlantida, the world's longest submarine lava tube on Lanzarote in the Canary Islands off the western coast of northern Africa. The discovery, which has implications for the evolution of an ancient group of crustaceans, will be detailed in September in a special issue of the journal Marine Biodiversity.

While in the cave, the international team of scientists and cave divers also discovered two previously unknown species of annelid worms.

The 5,000-foot (1,500 meter) long tube where the crustacean lives formed some 20,000 years ago when the Monte Corona volcano erupted on the island of Lanzarote. The erupted molten rock flowed across the land and into the ocean.

"The tunnel formed because the lava on the surface cooled and solidified faster than lava in the center of the stream," said study researcher Stefan Koenemann of the University of Veterinary Medicine Hannover, in Germany. "At present, there are no more active volcanoes on Lanzarote. The last eruptions took place in the 18th century."

The tunnel's newly identified inhabitant, which is less than an inch (10 to 20 mm) long, belongs to the class Remipedia, whose crustacean members live only in cave systems. Like this species, most other remipedes lack eyes and are hermaphrodites (equipped with both male and female sexual organs).

And similar to its relatives, S. atlantida is adapted for life in a dark, dismal cave. With long antennae sprouting from its head and plenty of sensory hairs along its body, the animal can easily feel its way along the dark tunnel.

Organisms like S. atlantida also must be savvy hunters to nab food where resources are limited, Koenemann said.

"Apart from its powerful raptorial head limbs, which are used to hunt and seize other cave animals up to twice their body size, remipedes like Speleonectes are also filter- or particle feeders and scavangers," Koenemann told LiveScience. "In other words, they are capable of using and ingesting a large variety of food types."

S. atlantida looks similar to the only other remipede, called Speleonectes ondinae, found in this lava tunnel.

Since most remipede species, about 20, live in marine caves in the Caribbean, scientists think the two Canary Island cave dwellers are relics from long ago, isolated by Earth's ever-shifting continents, which were once all joined.

"The previously known species in the tunnel, Speleonectes ondinae, was considered an isolated relic that became separated from the main distribution area in the larger Caribbean region a very long time ago, presumably more than 200 million years ago, when the continental plates began drifting apart," Koenemann said.