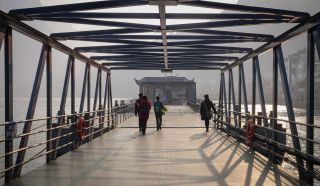 China is ending its lockdown of most of Hubei province at midnight, officials announced in a notice on Tuesday (March 24). But Wuhan, the city in Hubei province where the coronavirus outbreak first began at the end of last year, will remain under lockdown until April 8, they said.

As much of the world is only now facing the worst of the outbreak, the province where it all started might be slowly winding back down to normal.

On Jan. 23, China blocked the borders of Wuhan, home to some 11 million people, not allowing anyone to enter or leave the city, according to Time magazine. This lockdown came a couple of days prior to China's Lunar New Year holiday, which typically prompts millions of people to travel, they wrote. All flights, trains and buses were canceled, and highways in and out of the city were blocked, according to CNN.

Now, those restrictions are being lifted. Though people in Wuhan are ordered to stay under lockdown until April 8, most others who are healthy in Hubei province will be allowed to leave the area starting at midnight tonight, according to the notice.

Hubei had previously ordered residents to get a QR code on their phones to indicate their health status, according to CNN. The people who have a green QR code — indicating they are healthy — will be allowed to leave, officials said. People from elsewhere in China will also be able to enter most cities in Hubei if they are healthy.

Other parts of the country are also lifting restrictions, opening some restaurants and kickstarting construction projects once more.

However, the COVID-19 infections haven't completely ground to a halt in China, mainly because of infected people entering the country from abroad, according to Time magazine. So starting on Wednesday (March 25), Beijing, for example, will require COVID-19 testing and two-week quarantines for anyone who comes into the country, according to Time magazine.